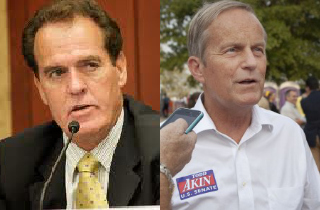 “What he meant by legitimate rape was just look, someone can say I was raped: a scared-to-death 15-year-old that becomes impregnated by her boyfriend and then has to tell her parents, that’s pretty tough and might on some occasion say, ‘Hey, I was raped.’ That’s what he meant when he said legitimate rape versus non-legitimate rape. I don’t find anything so horrible about that.”

Gingrey then went on to defend Akin’s more controversial claim that in the event of a “legitimate” rape, the female body works to prevent pregnancy. “He’s partly right on that,” the Georgia congressman said:

“I’ve delivered lots of babies, and I know about these things. It is true. We tell infertile couples all the time that are having trouble conceiving because of the woman not ovulating, ‘Just relax. Drink a glass of wine. And don’t be so tense and uptight because all that adrenaline can cause you not to ovulate.’ So he was partially right wasn’t he?”

Critics of Akin’s beliefs have pointed to the fact that rape does not actually lower the odds of pregnancy, and that falsely reported rapes, i.e., “illegitimate rapes,” are incredibly rare.

UPDATE: Asked for comment by the Atlanta Journal Constitution, Rep. Gingrey claimed the quotes have been unfairly misconstrued by his political opponents:

“At a breakfast yesterday morning, I was asked why Democrats made abortion a central theme of the presidential campaign. I do not defend, nor do I stand by, the remarks made by Rep. Akin and Mr. Mourdock. In my attempt to provide context as to what I presumed they meant, my position was misconstrued.”