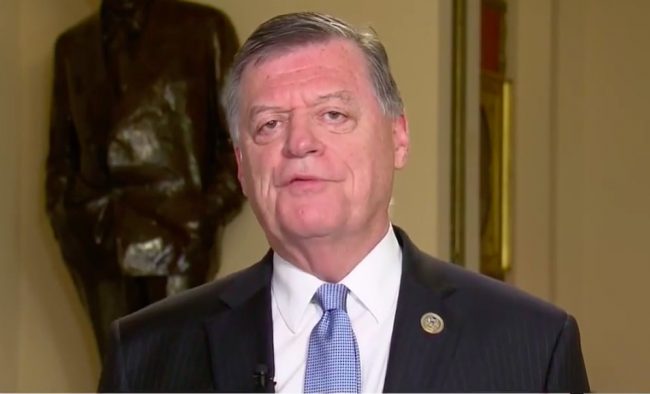 President Donald Trump is promising billions in relief aid to help Texas in its recovery efforts post-Hurricane Harvey and will press Congress to move quickly in approving emergency funds for the flood ravaged state when it returns from recess next week.

However, as the Associated Press noted today, this will surely lead to issues for one of Trump’s favorite projects — the proposed border wall with Mexico. One way GOP lawmakers were looking to provide funds for the wall was to cut close to a billion dollars from FEMA’s disaster relief account. Now, in the wake of the storm, there’s no way Republicans can deal with the poor optics such a move would provide.

With Trump having already threatened a government shutdown if he doesn’t get funding for the wall in the upcoming budget, how are Republicans on Capitol Hill going to deal with him when he starts making demands next week? Well, as the AP noted, one lawmaker wants the president to remember this isn’t a reality show:

“You’re not going to bully United States senators, this isn’t the Apprentice,” said Rep. Tom Cole, R-Okla., referring to Trump’s star turn on the reality television show. “You can’t look at them and say you’re fired, you’re going to need their vote and you oughtta remember that they’re going to be at the table in every major deal you need for the next three years. So I just don’t think that’s a productive way to proceed.”

Give it up to Cole for not only referencing Trump’s previous job before being president, but also his catchphrase from the show.

It will be interesting to see how much Trump pushes the need for wall funding in the budget next month and whether or not he continues with his calls for a government shutdown if he doesn’t get it, especially with so much focus now on Harvey disaster relief. Prior to Harvey hitting landfall and after one of Trump’s shutdown threats, Speaker of the House Paul Ryan stated that he doesn’t think a government shutdown is necessary.