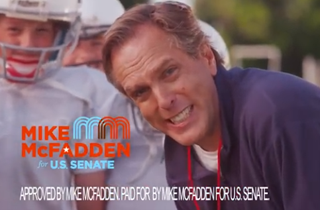 Minnesota Republican senate candidate Mike McFadden managed to seize national attention with his first TV ad, in which he gets punched in the groin by a small child wearing football gear. Unsurprisingly, many of the reactions on social media were negative, with people criticizing McFadden for using children as talking points, and the controversy’s been dubbed “groin-gate” by local media. But BuzzFeed recently discovered that “groin-gate” went one step further: The McFadden campaign seems to have been quietly deleting those negative comments on Facebook, and replacing them with positive ones.

A tipster pointed out a cached version of McFadden’s Facebook post to BuzzFeed, in which a majority of the responses, mostly from his supporters, were negative. “Always annoying when kids tell adults what decisions to make. It’s not as cute as you think,” wrote one.

“Look at the ads for Al Franken,” complained another. “You have a ton of money, make some real ads.” (McFadden is self-financing his campaign.)

However, all those negative comments have suddenly vanished from McFadden’s post at 3:30 PM CT yesterday, and, roughly five minutes later, were replaced with three positive comments: 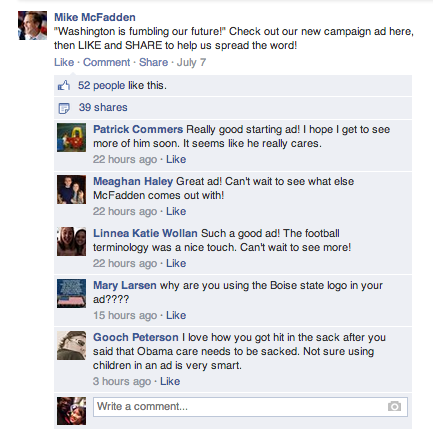 Fun fact #1: the McFadden campaign’s been on the defensive ever since the ad came out, attempting to clarify that the child punched McFadden in the stomach, not the balls. (His squeaky “I’m Mike Fadden and I approve this message” indicates otherwise.)

Fun fact #2: the team behind this ad is also the team behind Joni Ernst’s infamous “hog castration” ad. Now, I understand the desire to produce balls-centric work all the time (trust me, I understand), but for a political ad? Guys, you’re painting yourself into a corner you can’t get out of. A corner full of bruised testicles.