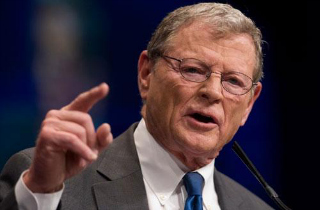 Gaffney initially accused Obama of practicing “national security fraud” and of “misleading the American people” by championing efforts to reduce the proliferation of nuclear weapons:

“President Obama made a statement yesterday that just is stunning. He said to a group of nuclear disarmament enthusiasts: ‘We’re moving closer to the future we seek. A future where these weapons never threaten our children again. A future where we know the security and peace of a world without nuclear weapons.’ Senator, I suggest to you that represents national security fraud. I just wonder, knowing what you do about the proliferation of nuclear weapons not just in Iran but the buildup by the Chinese that have just tested a new long-range missile from mobile launchers capable of reaching this country, what on earth is the president doing misleading the American people?”

Inhofe responded that Obama’s statements were problematic, and that conservatives need to realize that, in the president, they are truly dealing with “the far-left” who “doesn’t think we need a military to start with, they really don’t.”

He concluded: “They really believe if all countries would just stand in a circle and unilaterally disarm and hold hands then all threats would go away, they believe that. They would never say that but they do believe that.”