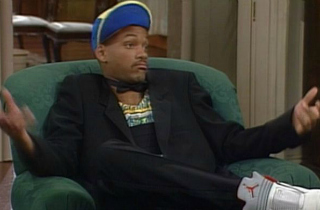 Even though President Barack Obama had campaigned on a promise of closing the detention facility at Guantánamo Bay, Cuba, due to many complaints, including human rights violations, the camp is still functioning with 168 captives, now in their second decade of detention.

The following illegal (read: fake) wire transmission was (not) intercepted on its way out of the Gitmo detention facility, presumably headed for somewhere in the Middle East. As the government works tirelessly to track down its destination (not really), we’ve taken the liberty of translating it here for you, unedited:

“Now this is the story all about how my life got flipped-turned upside down. And I’d like to take a minute, just sit right there. I’ll tell you how I became the prince of watching a show called Bel-Air.

“In southwest Waziristan, I was born and raised. On the battlefield is where I spent most of my days. Chillin’ out, maxin’, relaxin’ all cool. And all shootin’ some tin cans outside of the school. When a couple of guys who thought we were up to no good, startin’ making trouble in my neighborhood. I got in one little fight and they all got scared — they said, ‘You’re movin’ with your bro and uncle in Gitmo-Air’

“Now at Gitmo-Air, I whistled for the library cart, and when it came near this one DVD said ‘fresh’ and had a dice in the mirror. If anything I could say that this tape was rare, but I thought ‘Nah, forget it’ — ‘Yo, homes, let me watch Bel-Air!’

“I pulled up to the viewing room about 7 or 8, and I yelled to the guard, ‘Yo, homes, smell ya later.’ I looked at my kingdom, I was finally there — to sit on my throne and watch The Prince of Bel Air.”

As it turns out, this wire reflects a recent Miami Herald report on the DVD-renting habits of the 168 detainees. Apparently the facility’s librarian says he just ordered all six seasons of the 1990 TV sitcom The Fresh Prince of Bel-Air due to a considerably high demand for the series.

This new demand for the Will Smith-starring comedy has supplanted the previously high demand for J.K. Rowling’s Harry Potter series of novels. “They’re over that; it’s been more than a year,” a librarian told the Herald.

Cooperative captives, which make up the majority of the prisoners, are allowed to watch the TV show communally in their medium security lock-ups at any time. Their viewing rooms are essentially cell blocks of up to 20 men, equipped with a flat-screen TV bolted to the wall. A maximum security captive, however, can only watch the show alone for a couple of hours each day. The solo viewing room includes a recliner with one ankle shackled to a bolt in the floor.

Interestingly, the report notes that the librarians have also reported previous spikes in demand for The Bill Cosby Show, perhaps indicating a penchant among the detainees for aspirational stories about black families in the United States.