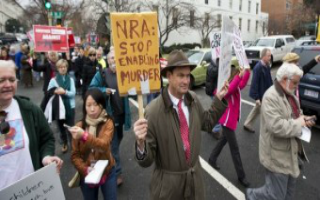 It is hard to recall a moment in recent history in which the gap between members of the media and the public they claim to serve has been so wide as the “national conversation” about stricter gun laws which has followed the tragic shooting death of 26 children and teachers in Newtown, Connecticut. But if the media is slightly – just slightly — out of step with the public regarding their unashamed support for new gun laws, their response to the NBC anchor David Gregory’s recent trials with the law after he brandished a high capacity magazine on television verges on blatant hypocrisy.

The atrocity in Newtown has caused support for strengthened laws covering the sale of firearms to increase fairly dramatically. In a poll conducted by Gallup from December 19 – 22, support for new laws restricting the purchase of guns has increased from 43 percent in 2011 to 58 percent today. Support for new gun laws in the wake of the tragedy in Connecticut has also increased from 35 percent earlier this year to 47 percent today (while 46 percent oppose new gun laws and support only the enforcement of gun laws presently on the books.) American adults also favor limits to gun show sales and high-capacity magazines, like those used in mass shootings in Aurora, Colorado, and Newtown, Connecticut.

However, that same survey found that a majority of Americans oppose a ban on semi-automatic “assault rifles.” By 51 to 44 percent, Americans oppose a law which would make it illegal to manufacture, sell or possess so-called “assault rifles.” Public opinion on this topic has remained virtually unchanged by 2012’s high profile mass shooting incidents.

If one spent the majority of their time consuming print and television news coverage of the topic of stricter gun laws since the attack in Newtown on December 14, one could be forgiven for presuming that stricter gun laws are a national priority eclipsing all other issues of consequence. The Washington Examiner’s Byron York details a disconcerting number of straight news journalists on a variety of cable news networks who have thrown off the shackles of unbiased coverage of the gun control debate and embraced advocacy – and embarrassing hyperbole that they must assuredly believe justifies the ends.

MSNBC dayside anchor Thomas Roberts lashed out at a sitting Congressman when he suggested that European nations with stricter gun control laws than many parts of the United States continue to cope with gun crime and mass murder. “So, we need to just be complacent in the fact that we can send our children to school to be assassinated,” Roberts fired back.

“I just have to say, your position completely boggles me, honestly,” said CNN anchor Soledad O’Brien to Florida Gov. Rick Scott after he declined to outline what new gun laws he would support to prevent future Newtown massacres. Her colleagues Don Lemon and Piers Morgan have also expressed their unqualified support for stricter gun laws — in Lemon’s case, in the face of evidence that gun violence is on the decline.

Gone are the days when it was a news anchors job to report the political position of America’s elected officials. Today, it is acceptable – even commendable – to berate them on camera for holding views with which the anchor disagrees.

While many in the nation’s establishment news media display naked contempt for lawmakers who may differ with them on the necessity of more gun laws, the loathing with which they regard the National Rifle Association is unparalleled.

Last Friday, when NRA CEO Wayne LaPierre held a press conference, the incandescent rage which emerged from journalists on Twitter towards his suggestion that schools should invest in armed guards was staggering. The Daily Caller has compiled a post featuring the most over-the-top reactions form members of the fourth estate. When Jeffrey Goldberg, columnist for The Atlantic, noted his surprise at the outburst of anger towards LaPierre, the response he received from The New Republic’s Marc Tracy was perhaps the most illustrative of the elite media’s opinion regarding the NRA. “So either reporters on Twitter are crazy or the NRA is uniquely hateful. Which do you think it is,” Tracy asked pointedly. “[Reporters] think they are smarter and better than a retrograde, evil organization? They are! We are!”

Once again, members of the media show how out of step they are with public opinion. USA Today/Gallup found in a poll released yesterday (helpfully placed in the final paragraph of their release) that 54 percent of adults have a favorable opinion of the NRA.

It would be interesting to have a media that was a mistrustful of this “uniquely hateful” lobbying group as they were of, say, the various groups in Washington dedicated to protecting sugar beet subsides. That would be an informative national conversation which would have profound implications for the American economy and expose a powerful set of entrenched interests which have a near stranglehold on Washington’s lawmakers.

Misplaced priorities are one thing – they are easily exposed and, maybe, just as easily forgiven; the necessities of making compelling television or newspaper copy supported by advertising being what they are. Hypocrisy, on the other hand, should be unforgivable. The “national conversation” has, in a way, been blessed with a glaring example of the media’s hypocrisy in a rather silly incident in which NBC’s Meet the Press anchor David Gregory ran afoul of local gun laws in Washington D.C. when he displayed a high capacity magazine on camera this past Sunday.

Members of the media, on the right and the left, rushed to his defense with a collective eye-roll. Gregory’s infraction is “[n]ow officially the dumbest media story of 2012,” wrote New York University professor Jay Rosen on Twitter. “Dumb, dumb, dumb.” Media critic Jeff Jarvis used “nonstory” twice in one sentence to describe Gregory’s predicament. “A total waste of time,” declared CNN media critic Howard Kurtz when describing the police probe into Gregory’s display of the offending magazine.

“How much time and money is going to be spent (wasted) investigating [Gregory],” asked Fox News Channel host Greta Van Susteren. “I will bet my right arm David Gregory is not going to go out and commit some crime with that magazine…or that he intended to flaunt the law (if it was against the law.) At worst, it was a stupid TV stunt (and so what!).”

Even the Wall Street Journal’s editorial board went out of their way to attempt to exonerate Gregory’s actions. Their argument is, in essence, his intentions were pure, even if his actions violated the letter of the law. “So here we have a possible indictment that would be entirely nonsensical of a journalist who was trying to embarrass an NRA official over an ammunition ban whose impact would be entirely symbolic,” reads a Thursday WSJ editorial. “It isn’t clear that Mr. Gregory is guilty of anything other than perhaps overzealousness in pursuit of the conventional gun-control wisdom, which is not a crime unless we want to empty newsrooms and fill up jails from coast to coast.”

The media’s argument in favor of treating Gregory differently from any other citizen who does not anchor a popular Sunday news broadcast is, essentially, “come on! Really?”

Yes, really. The media’s defense of Gregory is entirely personal – he is a member of the media simply doing what the media does. Even if this law is applicable to Gregory (a fact which the media seems prepared to debate), this particular infraction should not result in any penalties. At no point has any member of the media asked if Washington D.C.’s law, which is aimed at reducing the glamour of these extended magazines, is absurd. If Gregory was an anonymous reporter producing this clip during a local news broadcast, or even in private, the media’s response to his infraction would probably have been much different. In fact, as a reader of POLITICO’s Dylan Byers points out, there is historical evidence that suggests it was different not long ago.

While interviewing Sen. Bob Dole (R-KS) in his office, journalist Jack Anderson revealed a handgun from his pocket. His intention was to demonstrate security lapses in Washington. Capitol Hill police did not take the incident lightly. Neither did Anderson’s colleagues. “A committee of journalists reprimanded the columnist Jack Anderson today for his role in bringing a gun into the Capitol for a television program on terrorism, but the panel did not revoke his press credentials,” reads a 1989 Associated Press report detailing their response to an infraction by a fellow member of the tribe. At least, the media’s reaction was swift and unambiguous when their access to newsmakers was threatened by a fellow journalist.

L’affaire de Gregory has exposed an unseemly sense of entitlement in the elite media. If the post-Newtown debate over gun control has shown that the media is somewhat out of touch with average Americans, the Gregory episode has revealed that they do not see themselves as average Americans.