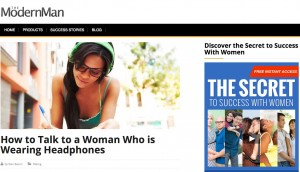 A website called The Modern Man has riled up the Internet over the past few days, so let’s go over a little context, okay?

After Elliot Rodger‘s shooting rampage through Isla Vista in 2014, the concept of a “pick-up artist” was introduced to the general public and that public was shocked to learn that there are men who swap tips on picking up women because they feel so entitled to them. In 2005 there was a breakthrough book and in 2007 a show, but the negative connotation came later, after all the forums popped up and George Sodini went on his own killing spree in 2009.

There is considerable debate over what constitutes a real PUA. Rodger posted on a forum about how awful PUA tactics are; Sodini has been disavowed by PUAs because “[a]ttending a pickup workshop and sitting in the audience… for a few hours does not make one a pickup artist.” Without getting into the nitty-gritty of all of it, there are a lot of these groups and while there is obviously overlap, it can be hard for the uninitiated to tell the difference between people who subscribe to “red pill” ideology, people who believe in progressing men’s rights, pick-up artists, and “men going their own way” or MGTOW. All of these schools of thought tend to share a view that women are manipulative, overrated, and only good for sex. A person who doesn’t explicitly identify as a PUA or a follower of the associated “artistry” can still espouse the beliefs.

Having said all of that, it seems pretty clear that The Modern Man is a PUA brand. Pick-up artistry, of course, is all about the tricks that men can use to get women to sleep with them. “Negging” women with little insults is a pretty common one. “Peacocking” by wearing extravagant clothing is another. The Modern Man sells an audioguide that promises to give anyone willing to spend $97 their very own set of 21 tips to get a girlfriend.

They also have a blog and it’s free to access! That’s where the problems start. Yesterday, one of their posts from 2013 picked up some traction:

if you would like to kick this author or his followers in the nuts I will defend you at a discount. https://t.co/2cgVx4mkMY

The piece lists “giving up too easily” as one of the main problems men make when approaching a woman wearing headphones and suggests standing about 1.5 meters away from the woman in question while giving her a “confident, easy-going smile.” It suggests that a man “wave [his] hand in her direct line of vision so she can’t ignore [him],” too.

Dan Bacon, the guy behind the whole production, updates the blog all the time with posts that have titles like, “The Most Important Skill That a Guy Needs to Have to Be Successful With Women,” and “How to Make a Woman Feel Intense Attraction For You.” The stock images tend to show women fawning over men. The headphones article is not at all out-of-the-ordinary on Bacon’s page. Oh, and he’s really, really into talking about ways to win back an ex. See?

The “How To Talk To A Woman Who Is Wearing Headphones” guy’s feed is a litany of self-owns pic.twitter.com/ge6uW7DbKz

@Popehat my man is kind of a one trick pony pic.twitter.com/eTyiwU9b51

Reading the list of other articles the “How to Talk to a Girl Wearing Headphones” guy wrote and wow. pic.twitter.com/yUXrCKLaQA

Although Bacon’s posts have been readily available for a while, the headphones thing has really taken off and launched a conversation about what this “artistry” is really about.

Rather than help with cues, this stuff tells them to ignore or override cues. Will make them more isolated and resentful ultimately. /3

@Popehat It really is the relationship-advice equivalent of payday lending.

@Popehat it’s almost like that plays right into the MRA/PUA’s hands by exacerbating the problems of a susceptible populace!

Some people are making jokes about how ridiculous it is to assume that a woman should talk even when she is clearly doing something else. They’re tweeting things like, “How To Talk To A Woman Who Died 5 Years Ago But You’re Still Totally Sure She’s Sending You Vibes,” and “How To Talk To A Pregnant Woman In A Stock Photo Holding Headphones To Her Belly.”

Art from the original article: She’s surreptitiously tapping out 9-1-1 pic.twitter.com/3ShUk21eX5

The jokes are funny, but they’re making solid points about unjustified entitlement and the ways women are made to feel uncomfortable and unsafe as they go about their daily lives.

I once got 3 unsolicited dude phone numbers while promoting a holiday pub crawl dressed as a turkey, so no surprise on the headphones thing.

how to talk to a woman wearing headphones:
1. be the artist she has currently chosen to listen to through her headphones

How to Approach a Girl Wearing Headphones

HOW TO TALK TO A WOMAN WHO IS WEARING HEADPHONES
Step 1: Don’t
Step 2: Truly, don’t
Step 3: She doesn’t wanna talk to you
Step 4: I promise

Women wear headphones & read books on their phone because they don’t want to talk to strangers. This isn’t a hard concept.

Women only please…
Have you ever worn headphones without any audio to avoid interacting with Some Random Guy?

HOW TO TALK TO A WOMAN WEARING HEADPHONES:
– punch self in face
– when she removes headphones, apologize for thinking she owes you her time

Anything that sparks a dialogue about consent and street harassment can’t be that bad, even if it is a three-year-old article by a man who is obsessed with getting his ex back. The examination of the types of articles that are widely shared on the kinds of forums that later turn out to be associated with involuntarily celibate men who kill women should be encouraged.