Hannibal Buress Stands by Cosby Rape Comments: ‘I Said It’ 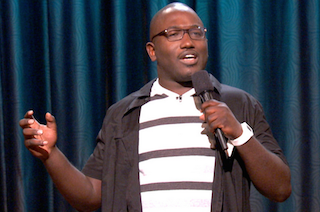 Comedian Hannibal Buress made news this week when a fan-posted video of bit he did about rape allegations against Bill Cosby at a Philadelphia theater made its way around the web. On Tuesday, Buress sat down with Howard Stern and stood by what he had said while expressing surprise over the unexpected interest in jokes he’s been making for months.

“I couldn’t agree with you more,” Stern said after bringing up the story. “First of all, I never found Bill Cosby funny,” he said, despite that fact that he “broke ground.” Referencing the infamous incident in which Cosby called up Eddie Murphy and told him to stop using profanity in his act, Stern said he always found him “condescending.”

Buress noted that this is first time something he said in his act has been picked up by the media as a story unto itself and he found it very “weird.” He added, “That wasn’t my intention to make it part of a big discussion, it was just something that I was doing in that venue right there.”

Asked by Stern if he’s “sorry” that his comments are out in the world now, Buress replied, “I said it and I’ve got to stand on it, but it is an interesting situation.”

“Yeah, because I think it’s something that a lot of people say in private,” Stern said of the accusations against Cosby, “and you kind of came forward and said it on stage.”

And watch video of Buress’ bit below, via YouTube: