Harry Reid Reportedly Talked Obama Out of Negotiations Over Shutdown

Harry Reid Reportedly Talked Obama Out of Negotiations Over Shutdown 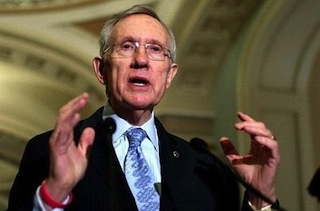 According to unnamed sources—take that as you will—President Barack Obama at least momentarily considered negotiating with congressional leaders over the continuing resolution stalemate, but was talked out of it by Senate Majority Leader Harry Reid.

“When the president considered sitting down with the four congressional leaders in the White House ahead of the deadline to avert a government shutdown, Reid privately urged Obama to call off the meeting, according to several people familiar with the situation,” Politico reported. “Reid believed that it would amount to nothing more than a photo-op that would give the false impression that a serious negotiation was occurring, even warning he wouldn’t attend such a session. Obama scrapped it.”

If true, this sheds some light on the “unity” that even Republicans have noticed among the Democrats in the battle over the looming government shutdown.

“He’s been the rock…and he’s had our whole caucus behind him,” Sen. Chuck Schumer (D-NY) told Politico. “Because if we negotiate on a short-term [government funding bill], what are [Republicans] going to do on a long-term bill? What are they going to do on the debt ceiling?”

If a continuing resolution is not passed by midnight tonight the government will shut down, an event even Republicans worry will be blamed on the GOP. Given that #HarryReidsShutdown is already trending on Twitter as a result of Politico’s report, GOP figures will likely use this to portray Reid as the real intransigent in the process.