Harry Reid: The Donald Trump of the Left
Opinion

Harry Reid: The Donald Trump of the Left 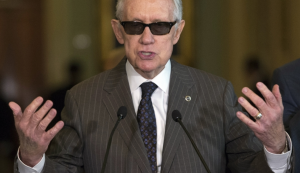 If you’ve been following the news the past few months, this recent story will sound all too familiar: media outlet gives an interview that prominent blowhard politician didn’t like. Blowhard goes on Twitter to mock and belittle media outlet and to call the interview biased. Media outlet punches back. Later, he gives a televised speech just to insult the media outlet again.

For those not up to date, the Democratic Senate Minority Leader took umbrage with a recent Morning Joe interview with his dreaded foes: the Koch brothers. Reid attacked MSNBC host Joe Scarborough on Twitter, who tweeted a rejoiner. But rather than letting it die there, Reid took to the Senate floor to blast Scarborough, the Koch brothers, and Morning Joe.

You can agree or disagree with Reid’s take on the Koch interview. But here’s a question: should this really be a major, pressing issue for the highest ranking Democrat in the U.S. Senate? A man who, until recently, was the man selected by Democrats to run the Senate? Or does this all come across as really, really petty?

Softball interviews happen. This conservative was not a fan of Savannah Guthrie‘s town hall interview of Hillary Clinton, and was especially not a fan of Lena Dunham‘s de facto campaign ad for the Democratic frontrunner. Lord knows we saw enough softball interviews of Barack Obama in 2008. But despite those softball interviews, no Republicans––high-ranking or otherwise––believed that the issue was so pressing, it deserved a speech before the most-respected legislative body in the nation.

But the Trump similarities don’t end there. Both Reid and Trump enjoy what I will diplomatically call a tenuous relationship with the truth when it comes to attacking their opponents. Trump had birtherism, of course. For Reid, he all but admitted to intentionally making false statements about Mitt Romney‘s taxes, with his sole defense being “Romney didn’t win.”

When selling these blatantly false smear jobs, they resort to appeals to shadowy agents who are “in the know”. Reid supposedly had someone who was familiar when Romney’s finances, while being completely unable to say how. Trump had detectives in Hawaii supposedly digging up things that would make your head spin about President Obama. Years later, Trump refuses to even address those comments and Reid gleefully smiles about his smears.

And then there’s the, uh, racial stuff. Trump has his Mexican boogeymen who rape and pillage the countryside. Reid characterized Obama as “light-skinned, with no Negro dialect.” He told a group of Asians he thought they were “more productive” and that he can’t “keep his Wongs straight.” Then there was the time he thought that Clarence Thomas was white and lectured Hispanics, telling them they can’t be Republicans.

Why, they even both got rich in the same business. Reid’s only source of income was a lifetime of work as a public servant. But through a bunch of savvy real estate buys that coincidentally rocketed in value after Reid pushed a pork project through the Senate, he is now worth millions. Lacking Reid’s political connections, a poor, destitute Trump had to rely on a small million-dollar loan from his father.

Perhaps the saddest similarity between the two is that at one point, they were both respected. Reid was always a little underhanded, sure, but he commanded the respect of Republicans and Democrats through fifty years as an elected official. Trump built a real estate empire and rode the cutthroat Gordon Gekko/Wolf of Wall Street world of 1980’s Manhattan to fame and fortune.

But at some point, they became cartoons. Trump sold an over-the-top version of himself to NBC for a big payday, and did a complete political 180 when he realized that would earn him even more headlines. Reid, no longer running for reelection, allowed himself to become a hatchet man, shredding his credibility and legacy in an attempt to boost his party’s prospects in 2012 and 2014.

So yes, the left has a Donald Trump, and so does the right. And as is all too often the case in politics, no one wins.