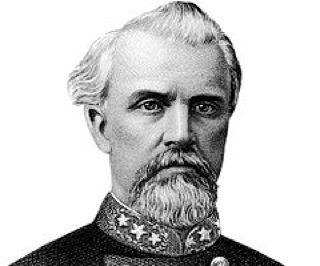 The 150th anniversary of the Civil War may not exactly be the happiest occasion for many in America, and in Mississippi, one group is trying to make the best of it by highlighting some of the region’s most prominent leaders. Proposing a new commemorative license plate every year, the group Sons of Confederate Veterans is attempting to get Confederate Gen. (and KKK grand wizard) Nathan Bedford Forrest on license plates for 2014. Needless to say, some Mississippians (namely, the state’s chapter of the NAACP) are not exactly thrilled by the idea.

According to the New York Daily News, General Forrest is most famous for his leadership within the KKK, as well as his role in “leading a massacre of black Union soldiers.” Sounds exactly like the kind of guy whose face you want to see on the back of the car in front of you every day on the road, huh? Shockingly, the celebration of this general’s career (rebelling against his own nation, becoming a high-ranking member of one of the most hated organizations in the nation’s history) is pushing all the wrong buttons with many in Mississippi, and the local NAACP has come out strong in condemning the act:

“He should be viewed in the same light that we view Saddam Hussein and Osama bin Laden,” Derrick Johnson, the president of the NAACP in Mississippi, told The Associated Press, adding that the Klan was a “terrorist group.”

“The state of Mississippi should deny any vanity tags which would highlight racial hatred in this state,” he said.

For many who live in northern or western states, the concept of Confederate pride in the year 2011 is extremely difficult to understand, much less defend. But the group behind the movement to get Gen. Forrest on a license plate claim that the general redeemed himself “in his own time,” according to Sons of Confederate Veterans representative Greg Stewart, and while he was part of the greatest collective act of treason in the nation’s history, “we should respect that.”

Local CBS affiliate WJTV covered the controversy today, and found that their viewers did not exhibit any enthusiasm over “commemorating the past,” especially this past. Their report below: