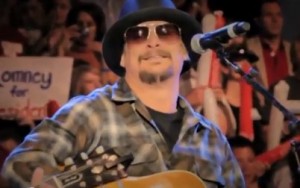 Didn’t Republicans used to make fun of adoring throngs at political rallies? You may have suspected all along that this was merely an expression of jealousy, and Mitt Romney‘s presidential campaign has just confirmed that. In a new web ad entitled “Red Rocks,” the Romney/Ryan campaign quick-cuts its way through one campaign event that drew so many Coloradans that there were (gasp!) traffic jams, and people actually turned away from the Kid Rock-enhanced October 23 event at the (government-owned and operated) Red Rocks Amphitheatre. That Mitt Romney must be some kinda rock stah to draw a throng of… 10,000 people.

Ten thousand people? You know what the Obama campaign calls a crowd of 10,000 people? A slow day at the phone bank. The Romney campaign was so jazzed by this one crowd that they based a zazz-filled campaign ad around it. President Obama drew a larger crowd the next day. In Denver. Without Kid Rock. Without Kid Rock!

Whining about the crowds at rallies is something of a cottage industry among conservatives, but this ad is aimed at more than just the paranoiac Cheeto brigade. The Obama campaign has expended a lot of energy pushing back against the idea of Mittmentum, which this ad aims to further create out of the thin Denver air. President Obama holds a slim lead in the state, but like most of this race, the upshot is that it will be extremely close. The Romney campaign’s momentum argument is meant to sway whatever slice of “undecided” voters are just waiting to vote for the candidate they think is going to win, presumably so they can brag about it to their cats.

The Obama campaign, for their part, has been messaging, to the press, that the Romney campaign is “desperate,” that they know they’re going to lose, and while this video does have the delusional quality of a tone-deaf garage band fawning over their own demo tape, the truth is that neither campaign has any reason to relax, even a little bit. Just about every aspect of this election is completely unprecedented, including the fact that it will be conducted in the aftermath of the Storm of the Century.

In fairness, Romney supporters, on balance, have more to be happy about at this point, since their candidate was headed across the River Styx on a flaming barge a month ago, before that first debate saved his bacon. There’s no denying he had momentum then, but it carried him as far as it was going to several weeks ago. This race, and Mitt Romney’s presidency, are about as evitable as it gets right now.