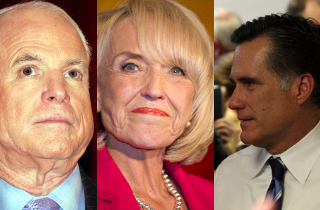 Has the Arizona legislature finally jumped the shark?

A week after they passed SB 1062, a bill that would allow private businesses to refuse services to members of the LGBT community, Arizona lawmakers would be lucky to find a single prominent member of the GOP or Republican strategist who supports their bill — and that includes the state’s two Senators and some of the very lawmakers who passed the bill itself.

Arizona Governor Jan Brewer’s decision on whether to sign or veto the bill is due by Saturday. Here’s a list of people trying to sway her to do the latter.

“It makes the party of Lincoln and Reagan look small, closed and intolerant and exacerbates our political differences with every single demographic group in America that is growing,” Schmidt told POLITICO.

Dowd was one of the earliest voices to denounce the bill.

“I think in the end Governor Brewer is going to veto this,” he said on This Week With George Stephanopoulos this past Sunday. “It’s an easy veto to do because of the things going in the business economy there.” Dowd went on to say the proponents of the bill were using their religion to cloak discrimination in much the same way Islamic terrorists used Islam to endorse violence.

Veto RT @Crossfire If you were Governor of AZ would you sign or veto the bill?Reply w/ Sign or Veto using #Crossfire pic.twitter.com/hoL3PUz6Ku

“Bill should be vetoed and buried,” Murphy emailed to POLITICO. “Bad on merits and politically it gives the Democrats a useful wedge issue.”

At least three Arizona legislators who voted in favor of the bill now want Brewer to veto it, claiming they either didn’t realize its discriminatory impact or hadn’t figured on the public backlash that could depress the state’s economy.

“While our sincere intent in voting for this bill was to create a shield for all citizens’ religious liberties, the bill has instead been mischaracterized by its opponents as a sword for religious intolerance,” they wrote. “These allegations are causing our state immeasurable harm.”

Hard to tell. Two sources closed to Brewer told news outlets Tuesday that she was planning to veto the bill, but her office refuted that later in the day, meaning she was probably using the leaks to gauge public reaction to a veto.

Brewer tweeted cryptically Tuesday night that she would “do the right thing for Arizona”:

I assure you, as always, I will do the right thing for the State of Arizona. #SB1062

Brewer actually has a history of going against her own GOP legislature; if everybody on this list gets their wish, she’ll do so again now.