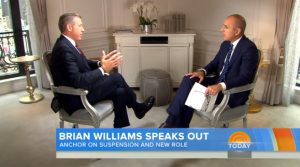 The TODAY Show aired Matt Lauer‘s pre-recorded interview with Brian Williams on Friday morning, and it was… awkward. Lauer repeated pushed his network colleague for straight answers, but Williams wouldn’t budge. I mean, he did answer Lauer’s question(s) about the infamous helicopter crash story, but Williams was unable to simply admit that he’d knowingly lied.

As you can imagine, Twitter had a field day with the interview.

From the get-go, many noticed just how unwilling Lauer was to let Williams sneak by his more pointed questions:

Wow, Matt Lauer is not letting Brian Williams off easy in this interview.

Despite Lauer’s insistence, many didn’t buy it:

This interview is not making Brian Williams look any better.

Brian Williams interview just now on Today. What a joke.

I would like this Brian Williams/Matt Lauer interview a lot more if it was live. Too fabricated – answers too rehearsed. Not sincere enough.

Watching the Brian Williams interview. I don’t think he’s helping himself. Seems apologetic but I’m not feeling the 100% accountability.

This Brian Williams interview is painful. Not because it’s bad…but because I’m not quite sure Brian gets it.

This Brian Williams interview is brutal. How hard is it to say you lied?

And then, there’s Donald Trump (or Trump’s social media intern), who used the British spelling of “apologizing” for some reason:

Just watched Brian Williams on @TODAYshow – very sad! Brian should get on with a new life and not start all over at @msnbc. Stop apologising