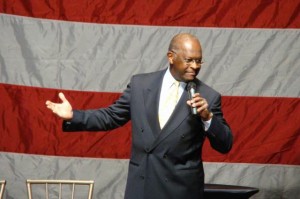 Republican presidential candidate Herman Cain spoke to an enthusiastic audience in Iowa and unveiled some ideas for how he would keep illegal immigrants from entering the United States along our southern border. While his critics might conclude this is proof that Cain is a fringe, non-serious candidate, supporters of his could just as easily argue that Cain was merely firing up the crowd with his proposal that included alligators, since he was clearly joking – right?

I just got back from China. Ever heard of the Great Wall of China? It looks pretty sturdy. And that sucker is real high. I think we can build one if we want to! We have put a man on the moon, we can build a fence! Now, my fence might be part Great Wall and part electrical technology. . . . Put me in charge of the fence and it will be a twenty foot wall, barbed wire, electrified on the top. And on this side of the fence, I’d have that moat that President Obama talked about. And I would put those alligators in that moat!

At least on the wall part of the proposal Cain seems serious, since many conservatives have long argued for an impenetrable fence. Yet regardless of how serious Cain intended to be with these statements, it’s no surprise why Cain’s popularity is increasing. How can you not show some admiration for a presidential candidate who so casually and humorously describes the Great Wall of China with this praise: “that sucker is real high!”

Watch the clip below from Think Progress: