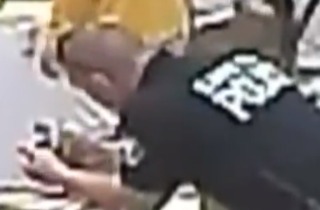 On Thursday, KTLA-5 reported on hidden camera footage that showed some objectionable behavior from police officers during a raid on an unlicensed marijuana dispensary. The cops were recorded playing darts on the job, eating pot-laced baked goods, and even joking about assaulting a woman with an amputated leg.

The footage shows that eight officers had masks on and their guns drawn when they entered Sky High Holistic, shouting “everybody on the ground” to customers and workers. After clearing the building of everyone present, the police began to remove the store’s mounted surveillance cameras, though they did not get the ones hidden by the owners when they heard about the upcoming raid.

Marla James, the amputee seen in the footage, intends to sue the city for allegations of police misconduct. Her reasons stem from a part of the video showing that as soon as she left the building, the cops started to crack jokes about her condition. One cop even said, “I was about to kick her in her f—ing nub.”

“They intimidated me. They threatened me,” James said, who is considered legally blind. “What they did, it was like shooting fish in a barrel.”

The rest of the video appears to show at least two different officers sniff, then eat, the store’s pot edibles, while the other officers sought out the rest of the store’s surveillance devices. Matt Pappas, the attorney who edited the video to cut out dead air, plans to bring a suit against the city on behalf of James and the store. “I’d like to see the police officers disciplined for the behavior that goes on here. I’d like to see the city stop engaging in illegal conduct.”

The Santa Ana Police Department has launched an investigation into the officers’ conduct, but a spokesman worried the edited video does not tell the whole story. “We’d like to see the original video,” said Chris Revere. “Anytime we get an allegation or indication that our officers might be engaged in misconduct, we want to make sure we conduct a thorough administrative investigation.”

You can watch the footage here:

[h/t The Blaze]
[Image via Screengrab]