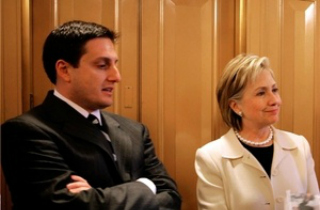 As a reporter, asking for comment from a government official can be a daunting task — there are the ignored emails, hostile and/or dodgy answers, and outright “No”s. But you surely never expect to be told to “fuck off.”

Sunday morning, BuzzFeed political reporter Michael Hastings had the pleasure of being told to do exactly that by Hillary Clinton‘s spokesman Philippe Reines. After Hastings asked the Clinton aide a series of questions about the State Department’s handling of the Benghazi consulate attacks earlier this month, and this week’s denouncement of CNN as “disgusting,” Reines became hostile and a heated on exchange of insults ensued on both ends.

The exchange began with Hastings sending the following email to Reines, chock full of seemingly innocuous, but forthright, questions about State’s handling of the violent attacks:

A few quick questions for you. Why didn’t the State Department search the consulate and find AMB Steven’s diary first? What other potential valuable intelligence was left behind that could have been picked up by apparently anyone searching the grounds? Was any classified or top secret material also left? Do you still feel that there was adequate security at the compound, considering it was not only overrun but sensitive personal effects and possibly other intelligence remained out for anyone passing through to pick up? Your statement on CNN sounded pretty defensive–do you think it’s the media’s responsibility to help secure State Department assets overseas after they’ve been attacked?

The “statement on CNN” Hastings referred to was Reines’ Sunday comments that CNN is “disgusting” for its “indefensible” airing of portions of murdered U.S. Ambassador Chris Stevens‘ diary. In his response to Hastings, Reine reveals annoyance at the BuzzFeed reporter’s questions and indicates that he believes there is underlying antagonism in the tone:

I’m adding my colleague Toria Nuland who I believe you know. She has addressed much of your questions below during her daily press briefings, so I’ll let her weigh in to remind you of what’s already been thoroughly answered. As far as the tone of my email, I think you’re misreading mine as much as I’m misreading yours as being needlessly antagonistic.

But on your questions pertaining to CNN’s handling of the diary:

• You know that all USG personnel were evacuated from Benghazi after the attack. So I’m not sure why you’re asking why State didn’t find the diary first.

• On material, I’ll let Toria reiterate, but the answer is no. Though you might want to ask CNN if they took anything else from the crime scene that they haven’t yet told anyone about.

• In terms of the media’s responsibility, I’ll start with the outlandish statement that I believe the media does have responsibilities. Your question seems to imply they have none and any expectation of responsible behavior is too much to ask. To be specific: I believe CNN had the responsibility to act as human beings and be sensitive to their loss when they first approached the family.

I believe CNN had a responsibility to not make promises to the family it would not keep.

Reines’ response also seemed to reveal that he and Hastings have previously butt heads, as he takes a slight stab at past allegations of shoddy journalism on the BuzzFeed reporter’s end:

I believe that you of all people, after famously being accused of violating agreed upon ground rules and questionable sourcing, would agree that it’s important for a news organization to maintain its own integrity if it is to be trusted. That begins with keeping its word. If you can’t manage that, then don’t give it.

I realize that the way this works is that you only you get to ask me questions, but I have one for you: if you were in Benghazi, went to the scene of the attack, found the ambassador’s diary, read every word of it, would you have called them and asked their permission to use it, then when you weren’t granted that permission agree that you wouldn’t use it in any way, and then a few days later just change your mind?

If the answer is yes, then you obviously agree that CNN handled this perfectly fine.

If the answer is no, if you would have decided its contents demanded reporting immediately, how would you have handled this differently then CNN?

And you should feel free to use every word above, in its entirety. Though I suspect you won’t.

Thanks for getting back to me. No, you read my email correctly–I found your statement to CNN offensive.

From my perspective, the scandal here is that the State Department had such inadequate security procedures in place that four Americans were killed. And then the Ambassador’s diary–and who knows what else–was left behind for anyone to pick up. Thankfully, it was CNN–and not Al Qaeda or some other militia–that found it and was able to return it to the family. That CNN used portions of the material in the diary they found at the scene–material that appears to contradict the official version of events that State/WH has been putting out–is completely in line with practices of good journalism.

The misinformation here seems largely to be coming from State and the administration. The defense that the administration has offered that there was no intelligence warning of an attack is weak. If there was no intel, then clearly the CIA and other intel agents stationed in Benghazi weren’t doing their jobs well. If there was intel, then we have some kind of cover-up–whether out of incompetence or ass covering before the election or just the trauma of losing four good men, it’s hard for me to say at this point.

It was at this point that the exchange became openly tense. Reines sternly wrote back:

Why do you bother to ask questions you’ve already decided you know the answers to?

Why don’t you give answers that aren’t bullshit for a change?

“I now understand why the official investigation by the Department of the Defense as reported by The Army Times The Washington Post concluded beyond a doubt that you’re an unmitigated asshole,” Reines wrote back. “How’s that for a non-bullshit response?”

“Now that we’ve gotten that out of our systems, have a good day,” he concluded, “And by good day, I mean Fuck Off.”

Hastings then responded with a personal shot at Reines’ reputation with women:

Hah–I now understand what women say about you, too!
Any new complaints against you lately?

“Talk about bullshit,” Reines wrote back. “Answer me this: Do you only traffic in lies, or are you on the ground floor of creating them? And since Fuck Off wasn’t clear enough, I’m done with you. Inside of 5 minutes when I can log into my desktop, you’ll be designated as Junk Mail. Have a good life Michael.”

Full report over at BuzzFeed.