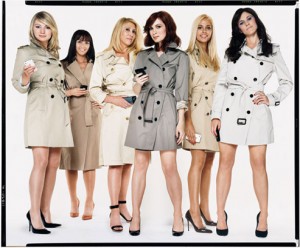 Ooh-la-la! Look how sexy Twitter just got! It’s got sexy ladies! In heels and trenchcoats! With gleaming hair and long legs and sleek gadgets and attitude! Ladies & gentlemen, Twitter has just been Vanity Fair-ized.

There’s nothing wrong with that — everything in Vanity Fair is Vanity Fair-ized, it’s Vanity Fair. And I love the idea of leaders in what is unquestionably THE platform of the last year being singled out by VF as worthy of its usual accolades of fabulosity. Because the world of Twitter is different. And having 1.6 million followers did change things for Felicia Day, and does give her the kind of clout that didn’t exist back in the olden days of even a few years ago. And they do have clout — the clout of spreading the word, of being members of a club that still has relatively few members (as of right now, just 208 people have over a million followers). This includes three of these women: Day, travel journalist Stefanie Michaels (1.4 million) and marketer Amy Jo Martin (1.2 million).

Not that the others are anything to sneeze at. New media strategist Julia Roy has 31K followers, and when she retweets you, you notice (I’m sure the same goes for Sarah Evans (33K), and she is welcome to demonstrate in person!). Pop17 video-blogger/lifecaster Sarah Austin is the baby of the bunch at 24K, but don’t underestimate — yep, that’s her giving away passes to CES on her Twitter feed, sponsored by Ford. The point is, they’re all influencers, in a space where influence multiplies over and upon itself because everyone’s tweeting and retweeting each other, reinforcing those bonds and the power of that reach. What it amounts to: real online power. And Vanity Fair is about nothing if not power.

Which is why it sort of rankled to see the stupid, twee Twit-speak used in this piece. Writer Vanessa Grigoriardis — who has protected her own tweets on Twitter, clearly ignoring the advice of her interview subjects — write a sentence like this: “For tweeple, e-mail messages are sonnets, Facebook is practically Tolstoy.” Tweeple? Really? Isn’t there enough of a variety on Twitter now, of people from all walks using it for a broad range of purposes, some fun and frivolous, some important and serious, that we can drop this dismissive terminology? And for all the trenchcoat-draped love given to the online celebrity of these women, I gave a sigh to see the sample tweets she used: “getting highlights before class,” “I hrd u had fun!,” “Wah, missing my twittr time!” I’m looking at the Twitter feeds of these women right now and I’m seeing both Roy and Evans up in arms over the H&M – Walmart destroyed clothing fiasco, outraged that it would not be donated (Evans’ Twitter bio mentions “non profit” and “social good”; Roy, who I follow, often tweets about charitable stuff). Austin is covering CES, Martin strikes me as a pretty hard core and focused professional, and as for Day, her latest tweet just took me to this great article that backs up where I’m going here. Here’s her tweet:

It was an honor to be included in the picture, but I can’t disagree w/these pts re: the Vanity Fair article http://bit.ly/5qw1au

The article: “Why Does Vanity Fair Hate the Women of Twitter?” from GeekWeek by a woman who goes by Kiala. She cites a line that made me double take, too:

I…what? I’m sorry, did Vanity Fair just refer to six successful women who have worked very, very hard to achieve success as “a bunch of cheerleaders who chat” WTF VF?

I got no problem with cheerleaders — or cheerleading, in the sense of being upbeat, encouraging, sharing, open and engaged, which is what all these women are — but wow do I have a problem with using it to buttress the impression of flighty, dippy girls obsessed with themselves, their highlights and their twitter followers. No. There are people like that, but not these people specifically, and not people who are engaged and involved on Twitter in general.

I don’t want to go through this and say, this is sexist, that is anti-Internet, Vanity Fair is glib and less interested in exploring a new emerging power community than framing it with the tropes of the bygones. No again! This is an article whose time has come and these women as much as anyone demonstrate the power and possibility and flexibility of the platform (though just for VF’s audience who may be new to the concept: Yes there are men on Twitter. Ha, ha. But also, there are minorities on Twitter and old people on Twitter and even — gasp! — balding, paunchy, unstylish people too. And some of them are even “twilebrities” themselves. What was that Day said about it being a democratizing medium?). Grigoriardis may not have been the best person to write about it, since she does little to explain how the community in which these women are such players actually functions, but it’s certainly time to acknowledge that Twitter has created a whole new universe of interconnectedness and influence and — importantly — results.

The women in the photo above are excited and proud about this article, and they should be — it gives a decent overview of the space and rightly casts them as leaders within it. But for someone like Grigoriardis, who usually does more thorough, smart, illuminating work, I would have liked to have seen better.

I tried to think of articles about Twitter that I’d recommend over this VF piece, and immediately came up with David Carr‘s recent meditation on the subject, and Will Leitch‘s profile on the founders for New York magazine last year — both attempts to seriously grapple with the whys of the phenomenon. Then I realized what this piece reminded me of: Maureen Dowd‘s asinine interview with founders Biz Stone and Ev Williams in last year’s NYT. Both that and the VF article seem to share the same contempt for Twitter, and for the strange creatures who would bother with it. If I knew nothing about Twitter I’d read Grigoriardis’ piece and think it was stupid, too.

Luckily for me, I can go right to the source. Felicia, Julia, Sarah, Sarah, Stefanie, Amy – I’ll see you online.