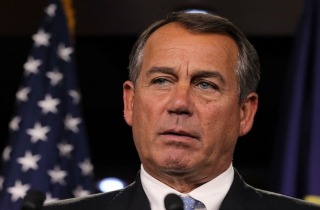 Conservatives in the online world have been attacking House Speaker John Boehner for his perceived “purge” of conservative Republicans from top congressional committees. That’s not the only thing they’re upset about, though: apparently many conservatives believe Speaker Boehner has largely abandoned their principles.

Boehner removed, among others, conservative Rep. Tim Huelskamp (R-Kan.) from his spot on the Agriculture Committee as well as conservative Rep. Justin Amash (R-MI) from the Budget Committee. Both Amash and Huelskamp weren’t afraid to express their frustration. Amash tweeted, “Still waiting for call from GOP leadership. Are they too embarrassed to explain they booted me for working to reduce debt?” Huelskamp was also vocal about his disappointment, saying,

“We were not notified about what might occur, but it confirms in my mind the deepest suspicions that most Americans have about Washington, D.C: It’s petty, it’s vindictive, and if you have conservative principles, you will be punished.”

Sen. Jim DeMint (R-SC), added his thoughts on the inevitable failure of Speaker Boehner’s fiscal cliff plan: “Speaker Boehner’s offer of an $800 billion tax hike will destroy jobs and allow politicians in Washington to spend even more.” Gabriella Hoffman of the conservative group Leadership Institute had this to say:“We want a competent Speaker of the House, not a feckless Weeper of the House. #FireBoehner.”

Tweeters have been posting “Fire Boehner” on their feeds as well as using the hashtag “#conservativepurge.” Journalist and blogger Michelle Malkin even started a new, more severe hashtag, “#purgeboehner.” Conservative news organizations are also getting in on the action, with Briebart.com posting the headline “Boehner, GOP leaders purge conservatives from powerful committees; update: Boehner scoffs.”

Boehner, for his part, denies any notions of a “conservative purge.” RollCall.com reports that Boehner held a closed-door meeting with top GOP lawmakers Wednesday and told them the decisions to remove certain representatives had been made in the GOP Steering Committee. He also denied that the committee removals were done specifically to block conservative opinions:

“The committee’s decision had nothing to do with ideology. For those suggesting otherwise, I’d respectfully suggest that you look at some of the people the Steering Committee put in charge of committees. I’d also suggest you look at some of the members who were added to the committees by the Steering Committee. If you do that and come away with the conclusion that there was a ‘conservative purge,’ I’d be interested [in] hearing the rationale.”