How Does Russian Propaganda Cover the Russia Protests? … It’s Awkward 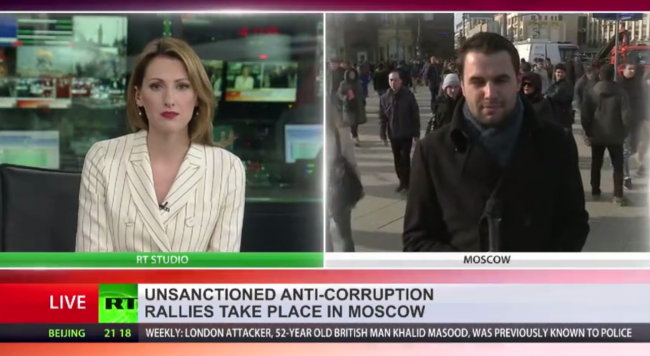 It’s not easy being a state-sponsored propaganda news organization when your country is embroiled in domestic unrest. Case in point RT. Once more commonly known by its full name — Russia Today — the Kremlin-financed media organization walked a delicate line covering scenes of protest and disorder that broke in Moscow on Sunday.

On the English language edition of its website, Monday, the network appeared to give full billing to the protests, with an article titled, Hundreds Detained at Unsanctioned Opposition Rally in Central Moscow. The headlines even promised “photos” and “video.” Notwithstanding a bizarre focus on the official legality of the demonstration, their written piece seemed to have most of the basics. RT listed allegations of official corruption as the cause of the protest, and was not shy about reporting on the hundreds who had been arrested, including teenagers.

Moscow police have officially confirmed the detentions of 500 people. Later, the head of the Moscow government’s Regional Security Department, Vladimir Chernikov, told RIA news agency that “more than 600 [people] were arrested,” adding that the exact number is “yet to be determined.”

The website also gave due billing to protest leader, Alexey Navalny, who was detained in Moscow. But of course, like a sophisticated spin machine, the pernicious qualities of RT are reflected not in outright lies, but rather their sins of omission. RT, for example, devoted considerable attention to a policeman who was seriously injured during the protests, even including video of a confiscated gun. By contrast, the Daily Beast’s write up, which included coverage of the officer, also pointed out that “many people were injured by club-swinging police” — a detail RT skirted.

Things took an even bigger detour in the video coverage. While RT embedded a number of clips throughout its piece, the lead video was bizarre mostly for its choice of B-Roll. The background footage accompanying the narration of the piece was noticeably civil — for coverage of civil disobedience.

While RT’s announcer spoke of a “wave of opposition rallies” involving 8,000 people, most of the footage just showed people walking around aimlessly. The protesters milling around Correspondent Ilya Petrenko mainly looked lost. News and footage of the arrests came at the end of the video, a very suspicious case of burying the lede.

Contrast that with CNN’s video coverage of the same rally, which opened with significant (if not gratuitous) arrest footage that included their own reporter, Fred Pleitgen, being harassed by police. Authorities declined to make any on-camera appearances in Mr. Petrenko’s walk and talk.

Defenders of RT might pivot to the position that mainstream coverage is so biased against Russia that RT coverage only appeared biased toward Russia because it was actually fair. Believe it or not, this “corrective” explanation was actually pioneered by none other than Fox News and Roger Ailes. As it has with Fox, that explanation might fly (sort of) if RT contained its “news” activities to within its borders. But history has already showed us the network has no intention of doing that.

As I have previously written, during the 2012 and 2016 election, RT was used as a cudgel to skew U.S. domestic media coverage in ways favorable to the Russian government. The direct interference of the Kremlin in the 2016 contest was so extensive that it is now the subject of an FBI investigation,

A recent report from the office of the Director of National Intelligence, spelled it out. The report claimed that in 2012:

The channel portrayed the US electoral process as undemocratic and featured calls by US protesters for the public to rise up and “take this government back.”

Russia’s state-run propaganda machine—comprised of its domestic media apparatus, outlets targeting global audiences such as RT and Sputnik, and a network of quasi-government trolls—contributed to the influence campaign by serving as a platform for Kremlin messaging to Russian and international audiences.

Say what you will about Fox News, it’s probably fair to say their executives are more concerned with ratings than toppling foreign governments. It’s parent company, 21st Century Fox, does not hunt down and kill journalists like the Russian government which finances RT.

In short, unless you’re an agitprop researcher, there is never a good reason to watch RT. Their deceptive coverage of Sunday’s protests are only the latest example of their true intentions.

Editor’s note: An earlier version of this article stated that RT’s Russian language website did not have any article referencing the Sunday protest, that was incorrect. According to the network, they did cover the protest in their Russian edition.