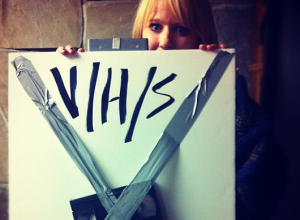 Word came out of Sundance that there was a jarring incident of fainting during a showing at a film in Park City. I’m not referring to Tracy Jordan ending up in the hospital due to excessive revelry (OK fine, it was for “altitude-induced exhaustion”). No, the latest is that during a midnight screening of the found-footage horror anthology V/H/S/ the content of that film caused adverse reactions in the seats. According to comprehensively accurate media reports one audience member fainted, and a second became sick in the lobby surrounding the viewing. This was reportedly due to some of the footage displayed on screen being too intense. Sure makes this unknown independent production seeking interest from movie conglomerates suddenly a must-see title!

Now far be it from me to suggest this might possibly be orchestrated hype. Then again, you know what –- close-be-it from me. Because looking over things, one finds that this is becoming rather common and, curiously, specific to those events where independent titles are hoping to garner distribution. Applying just a small dose of pragmatism, you see these dramatic medical events for what they surely are – PR malpractice. What has been going on lately is not an epidemic of movies crossing a line of sanguinary good taste but something more akin to what that famed movie huckster William Castle would be proud of seeing. And the entertainment press is playing right along.

There actually is a bit of a history of cinematic syncope, going all the way back to the origins of film. One of the oldest theater showings around the turn of the century was a basic shot of a train pulling into a station. Naïve audiences were thrown by the moving images, and many reacted as if an actual train were pulling into the theater. The concept threw many a patron into a tizzy. Audiences later found themselves swooning with regularity over titles such as The Omen, The Exorcist, Rosemary’s Baby, and Jaws. These titles bore an intensity that had numbers of audience members swooning in their seats. (Of note with Rosemary, while some stated the presence of the demonic baby was far too gruesome to bear it was cause of consternation for the producers, because the movie had no scenes depicting the child.)

Over time, this hysteria gradually died down; however we’re in the midst of a Fainting Renaissance of sorts, arriving in those circles where a rational mind would last think they’d crop up; at film festivals. The press interestingly exhibits little curiosity regarding these incidents. In fact, when giving fainting reports, the media take time to mention the film by name and the specific scenes which caused physical duress. This new phenomenon first exhibited itself in 1994, when Quentin Tarantino’s Pulp Fiction arrived like a super-nova. At the New York Film Festival there were reports of viewers fainting, specifically over the moment when the hypodermic needle gets slammed into Uma’s chest. Years later, Eli Roth benefited from a similar occurrence, when at 2005’s Toronto FF his Hostel was said to put a few patrons under their seat after seeing certain torture scenes. Following the screening, Roth pleaded ignorance to the events, even while he was in the theater at the time. To measure the accuracy of his comment, consider this: good friend Quentin Tarantino is an executive producer on the film.

Sundance recently had another swoon spell in 2009 when the baby-centric Grace was said to induce fainting in two members of that audience. The producer of that film wasted little time sending messages out reporting the incidents to members of the movie press. A few months later Lars Von Trier’s controversial Antichrist was reportedly causing blackouts at Cannes during sexual mutilation displayed on screen. In 2010 the James Franco biopic 127 Hours was famed for causing numerous blackouts during its arm-severing sequence at a number of festivals (so much so that distributor Fox made up promotional t-shirts for patrons to tout how they survived the experience). And just last September, at the Toronto FF, members of the audience supposedly lost it during a screening of The Incident, where somebody was burned alive on top of a kitchen oven.

Here is how we can discern just how much sophistry is behind these gripping accounts. Hold up these recent reports against that historical evidence mentioned. Those incidents from decades back involved a wide audience of less knowledgeable patrons. The subterfuge becomes obvious when you factor in that these recent examples all were found at film festivals, where audiences are supposed to be savvy and informed, as well as limited in number. It is revealing that a group considered to be cineastes is so regularly swayed by graphic images of stove-top immolation, and the like. And that is where all the media reports really fail in their mission. While covering these episodes they are either playing into the hands of the producers, or worse – they are playing along.
This blatancy really comes to light when you realize that after most of these titles were released to a larger, less experienced national audience, the incidents of fragile souls reeling at the garish gore completely disappear. Why the press is complicit is a bigger mystery that what is on screen.