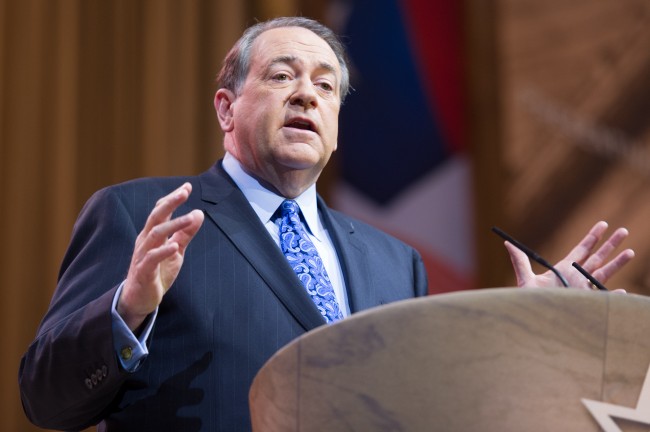 If you’re the parents of a recruit hoping to join the U.S. military, you might want to tell him or her to wait until President Barack Obama leaves office. Or so suggested Mike Huckabee during a radio interview this week.

Appearing Thursday on Iowa talk radio host Jan Mickelson‘s program, Huckabee declared that this current president has “an open hostility toward the Christian faith” and has purposely created a “hostile work environment” for Christians in the military.

According to the audio, first flagged by Right Wing Watch, Huckabee explained:

I know that sounds like a bold statement… but when you have a president whose administration orders its chaplains to put its Bibles away, not to pray in Jesus name, not to counsel people on the issues of sexual morality; when you have this attitude that is more about promoting gay marriage and gay rights in the military than it is about being able to protect religious liberty for those people of faith, it’s going to be hard to find people that are truly devoted people of faith and Christian believers and Orthodox Jews and others…. Why would they want to be in a military that would be openly hostile and not just simply bring some scorn to their faith, but would punish them for it?

The kicker came, however, when Mickelson asked the prospective presidential candidate (set to make an announcement on May 5) what he would tell the parents of children considering entry into the armed forces. His answer:

There’s nothing more honorable than serving one’s country and there’s no greater heroes to our country than our military, but I might suggest to parents, I’d wait a couple of years until we get a new commander-in-chief that will once again believe ‘one nation under god’ and believe that people of faith should be a vital part of the process of not only governing this country, but defending this country.