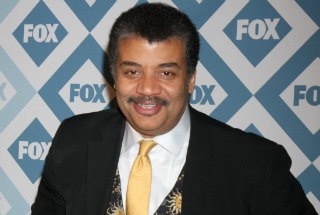 In an extensive interview with ThinkProgress, popular astrophysicist and television personality Neil deGrasse Tyson bashed both politicians and the media for the state of the U.S. debate about anthropogenic climate change, suggesting we are experiencing “the beginning of the end of an informed democracy.”

“If you want to lean in a political way because that’s your politics, you should do that based on an objective truth rather than cherry-picking science before you even land at an objective truth,” Tyson said of how he believes many partisans treat the climate issue. “You can’t just cherry-pick data and choose what is true about the world and what isn’t.”

He laid blame for the above on “an educational system that is not positioned to educate an electorate such that they can make informed decisions in this, the 21st century, where informed decisions based on objective scientific truths will play a fundamental role in what kind of society we create for ourselves.”

Asked what the media’s role is in creating what he perceives as a lackluster debate about climate change, Tyson pointed to the journalistic tendency to get both sides of a story. “[I]f I say the world is round, are you obligated to say the world is flat, lest someone think you are being biased in your reporting? Well, that’s absurd,” he said. “You wouldn’t do that, you’re educated. You know that there are certain points of view that have no foundation at all in objective truth.”

The scientist suggested journalists should reassess how much time they give to the scientific community versus the opinions of those who “deny” climate change. “If you allocated column inches in proportion to the scientific consensus of experiments,” he said, “there would be one sentence talking about people who deny climate change and the rest of the ten columns talking about research that supports it.”

But the reality of how media outlets frame the debate is much different, he noted. Framing climate change as an equal debate, Tyson added, “makes for headlines and more clicks.”

Tyson also revealed that he does not like to publicly debate “climate deniers” because “that implies that we each have opinions and ‘oh let’s see who can give the best argument for this audience so they can believe my opinion instead of yours.’ But if you’re more charismatic than I am or have better word use, or are more articulate, then you’ll win the debate, and that means you’ll be right and I’ll be wrong. This is not how it works.”

Ultimately, he concluded, “the moment the politicians start saying they are in denial of what the scientists are telling them, of what the consensus of scientific experiments demonstrates, that is the beginning of the end of an informed democracy.”