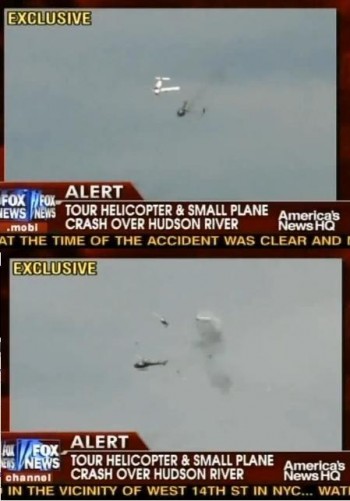 Fox News has just aired exclusive photos of the actual Hudson River crash between a plane and helicopter, taken by tourists on the scene. They are shocking photos – in the first one you can see the plane with the wing sheared off; Mayor Bloomberg said during his earlier press conference that the wings were sheared off by the helicopter rotors. The tourist, who came into the Fox studios for an interview, are Canadians visiting the city; the woman who took the photograph said that she had aimed her camera upward to capture both the helicopter and the plane in the same frame. Then the crash.

Veteran pilot and aviation reporter Miles O’Brien, meanwhile, has posted an initial response to the event with some background to the flight rules for the Hudson flight corridor where the plane went down. Earlier on Twitter he noted: “There is nothing inherently unsafe about flying the Hudson – but it does require a pilot’s full attention… You can fly into that corridor without checking in with controllers so long as you remain below 1,100 feet and stay over the river’s edges.” He elaborated on True/Slant:

“There are specific landmarks along the route where pilots are encouraged to report – the George Washington Bridge, The Intrepid Aircraft Carrier floating museum, The 30th Street Heliport, The Holland Tunnel (you can see the air shafts clearly), Governor’s Island and finally The Statue of Liberty (The Lady). The chopper pilots who fly these routes every day routinely make these reports – but frankly some general aviation pilots are better than others – and the radio reports are not mandated by any rules.

Bottom line: it is up to the individual pilot to “see and avoid” other traffic. I have flown this route many times, and I have often wished I could swivel my head like an owl as I looked for converging traffic.

But here is an important point: it was a Piper PA-32 – A Cherokee Six or Saratoga (the sort of plane John Kennedy Jr. flew to his demise). It is a low wing airplane with a rather long nose. In level flight, downward visibility for the pilot is not so good. So the ascending chopper might very well have been completely obscured by the wing and engine cowling.”

The plane was behind the chopper when they collided. Whether the plane hit the chopper from behind, or the chopper climbed suddenly into its path is not known — but clearly, the rules allowing them to be there at all are going to be examined more closely in the days to come.

Update: Here is the clip from Fox, courtesy of the @NewsPolitics Twitter feed: