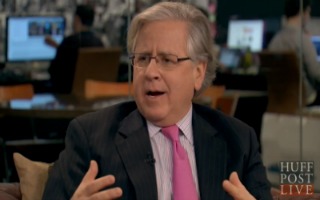 Is Huffington Post editor Howard Fineman the most hyperbole-prone pundit ever to have walked the earth? … No, probably not.

See how simple this gesture of moderation was? Well, that level of restraint seems to be beyond Fineman who, in his latest work and a subsequent interview on the Huffington Post, compared the abortion debate in America to the Civil War and the debate over slavery.

“I was on the floor of the convention halls at both conventions – the loudest single applause line of any at both conventions on a singular topic was on abortion,” said Fineman in an interview about his recent column. “Republicans, pro-life. Democrats, pro-choice. That is a bright line, a divisive line, that is every bit as deep and as emotional as the issue of slavery was 150 years ago.”

Of course, Republicans were not always the party that could claim to represent the majority of voters who hold pro-life values. In fact, the shift of those with anti-abortion ideals away from the Democratic party is a relatively recent feature of American politics. Similarly, there are plenty pro-choice Republicans, but the shift in the party’s center of gravity away from the Northeast and Upper Midwest towards the South has accelerated the exodus of pro-choice voters from the GOP’s ranks.

In this way, and speaking strictly as a political issue, those who support and oppose slavery went through a similar transition. The Whig party collapsed in the 1850s largely over the issue of slavery, when the Kansas-Nebraska Act bifurcated the party into Northern and Southern Whigs. Together with Free-Soiler Democrats and other anti-Slavery groups, they founded the Republican Party.

Likewise, Democrats had a number of pro and anti-Slavery standard bearers. The Democratic party’s presidential candidate in 1860, Illinois Sen. Stephen Douglas and then-Vice President John C. Breckinridge split the party into pro and anti-Slavery camps. The four-way 1860 election was decided on slavery and Union. It was a political reckoning many years in the making.

If Mr. Fineman believes that there is a similar election in store for America — in which the single most pressing issue is over abortion rights – that event is in the distant future. So distant, in fact, the continental drift which has recently cleaved California away from the continental United States and into the Pacific ocean will also be a pressing issue of national concern.

The Republican party in 2012 is not running on a platform that is anti-Abortion. There are, however, individual members of the party in office — either at the state or federal level – who are advancing a socially conservative agenda. It is the Democratic party that, judging from their convention, as Fineman noted, is running on a platform that is expressly pro-Abortion. This is an obvious and cynical tactic to drive up enthusiasm among a dispirited base. That is not slavery which, by 1860 was an immediately pressing pox on the American body politic. It is a feature of this election year and it is designed entirely to drive out the Democratic party’s base voters. Fineman knows that, but he is perhaps swept away by the passion of the moment.

Furthermore, Americans are not shifting to ever-widening extremes on the issue of abortion. If anything, Americans are coming closer to a consensus on the matter. Gallup, which has been polling adults on the issue of Abortion since 1975, shows that there has been nearly no movement in public opinion on the legality of abortion since Roe v. Wade in 1973. A majority of American adults favor safe and legal abortion in most cases with fringe elements favoring either complete legality or complete illegality.

Furthermore, those who consider themselves to be pro-life has increased from 33 percent to 50 percent since 1996, while those who consider themselves pro-choice has dropped from 56 to 41 percent in that same time frame. The fact that identity has shifted so much in the last 16 years but views on the legality of abortion are static shows that this issue is about cultural identity. Slavery was viewed as an economic issue in the South and morality issue in the North in the antebellum period. There is simply no comparison between the two wedges, beyond that it is an election year and it is in one party’s interest to split the electorate into besieged camps.

But that’s nowhere near as sexy as saying that the American Civil War II is on the horizon. I bet that would sell a lot of books. Meanwhile, calm and deliberative analysis remains chronically under represented at the Borders or Barnes & Nobles near you.