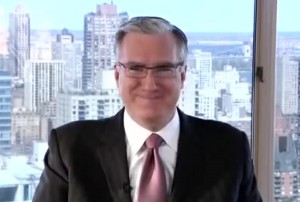 Keith Olbermann: principled real estate listing activist, or rank hypocrite? You be the judge. The former face of liberal rage on MSNBC has spent the last several weeks showboating about how he’s moving out of his Trump Tower apartment “because of the degree to which the very name ‘Trump’ has degraded the public discourse and the nation itself. I can’t hear, or see, or say that name any longer without spitting.”

Olbermann’s still milking his courageous move with another op-ed this week, but as The National Review‘s Jim Geraghty points out, Olbermann had no problem living under the Trump name through a whole host of indignities. Geraghty’s list, though, is a little bit incomplete. Olbermann also continued to live under the Trump name while Donald Trump was inciting entire rally crowds against his close friend and onetime girlfriend Katy Tur, for example. Trump’s campaign against Tur came to a head in December, but he has been targeting her for pretty much the entire length of this campaign.

Even better, though, is this: Keith Olbermann made a video in 2011, while he was between shows, in which he called Trump “racist,” told him to “FOK off,” and made numerous puns about Trump’s hair. Pay close attention to the view behind Olbermann:

In advance of his Current TV debut, Olbermann tweeted from his “FOK (Friends Of Keith) News Channel” account, and shortly began posting “Worst Persons” videos and the like, which were filmed inside that Trump Tower apartment.

Olbermann may be right about Trump and racism and political discourse, but when it comes to making us believe he’s moving out of Trump Tower on principle, maybe Olbermann ought to drink a tall glass of Shut the FOK Up.

@tommyxtopher Since the concept of "escalating protest" escapes you, educate yourself here: https://t.co/xWZcD8Qcsp