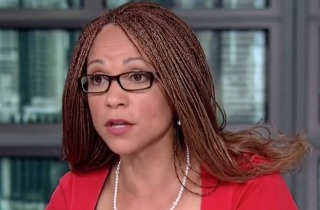 MSNBC’s Melissa Harris-Perry was in Iowa with her students for the caucuses on Monday, and yesterday she recounted a very disturbing and threatening encounter she had with a man who muttered something about Nazi Germany.

Harris-Perry wrote that a man walked up to her and asked, “I want to know is how you got credentialed to be on MSNBC.”

As they continued to talk, Harris-Perry felt something was wrong, especially when the man––anger growing in his voice––said, “I just want you to know why I am doing this.”

As Harris-Perry writes, she was absolutely terrified:

I freeze. Not even me – the girl in me. The one who was held down by an adult neighbor and as he raped her. The one who listened as he explained why he was doing this. She freezes.

I freeze. He speaks. And moves closer. Is there a knife under the coat? A gun? Worse?
And I can’t hear all the words. But I catch “Nazi Germany” and I catch “rise to power.” But I can’t move. I am lulled by a familiar powerlessness, muteness, that comes powerfully and unexpectedly. It grips me. Everything is falling away.

After remembering she’s with her students, she writes, she sprung out of there. But she was very concerned about whether the man was going to do something physical.

“I don’t know if he was there to kill me,” Harris-Perry says. “I know [my students] were there to save me.”