I Like James Comey, But This ‘Too Independent to Hug’ Business is Just Stupid
Opinion
Hug Gate

I Like James Comey, But This ‘Too Independent to Hug’ Business is Just Stupid 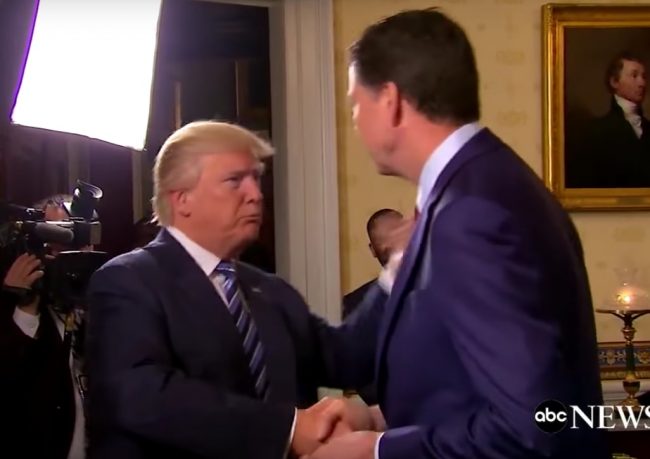 Yesterday, the world learned an amusing nugget about the ever enigmatic former FBI Director, James Comey. Apparently, in January, during a perfunctory gathering with law enforcement officials, Comey went out of his way to avoid any contact with President Donald Trump. As we learned from Lawfare‘s Benjamin Wittes, the six-foot-eight FBI director even went so far as to try and “camouflage” himself amidst the curtains in the White House Blue Room. As we now know, that didn’t work, and Comey was ultimately forced into an awkward hug handshake.

“Comey was disgusted,” wrote Wittes. “He regarded the episode as a physical attempt to show closeness and warmth in a fashion calculated to compromise him before Democrats who already mistrusted him.”

Disgusted?… because of a hug? If Democrats mistrust him, whose fault is that?

Like most people, I’ll admit I’ve been all over the map on James Comey, but the SOB was growing on me, especially since his testimony to the House Intelligence Committee where he offered what I felt were very convincing answers to his actions during the 2016 campaign. But the “too independent for a hug” line is just stupid. While the media narrative is keen to promote the anecdote as evidence of Comey’s rectitude, the whole thing strikes me as something closer to mania.

Comey is not a chameleon. He is a man — a very, very tall man. Trying to hide in the curtains in a small room only to harp about it later is not subtle, but in fact the opposite. Some might even call it “showboating.” The New York Times reports that Comey went reluctantly because “he wanted to represent the bureau,” but the bureau could have been perfectly well represented by then Deputy Director Andrew McCabe or any other number of other FBI brass. If Comey was really that terrified of being seen with Trump it would have been easy enough for him to stay home.

Now, of course, you might say ‘what does Jon Levine really know about any of this? Who the hell is Jon Levine to say what is or is not appropriate for Jim Comey.’ And that’s a fair criticism. So don’t take my word for it, let’s look at the actions of Comey’s immediate predecessor, the now suddenly relevant again Robert S. Mueller III. 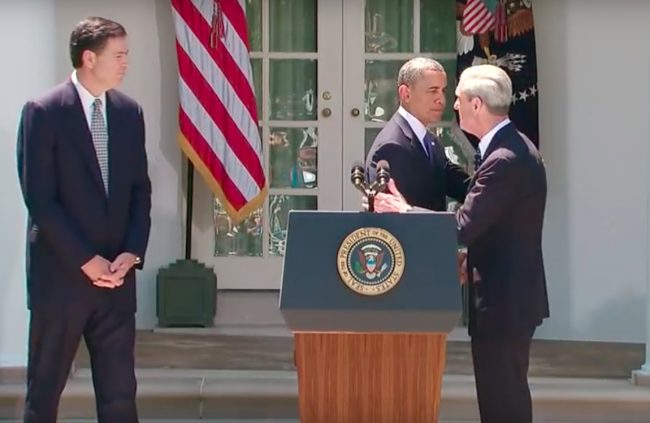 Now unless my eyes deceive me, that is a photo of President Barack Obama hugging then FBI Director Robert S. Mueller III. What makes this all the more amusing is that the hug came during the nomination announcement of Mueller’s successor on the job — James Comey. And there is he, doing that same hands folded over the front of his jacket routine he did in the Blue Room with Trump.

I’d love to know if Comey ever expressed any reservations about the Obama-Mueller hug to his pal Benjamin Wittes. I suspect not as Comey has often lauded his predecessor on the job and once called him “one of the finest people I’ve ever met.”

Last time I checked, the entire U.S. government was unraveling on its way to becoming an authoritarian Putin client state. Journalists and James Comey have enough to focus on — celebrating “Hug-gate” should not be one of them.