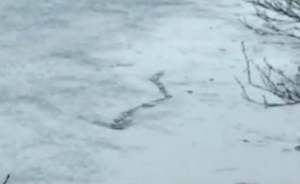 Cryptozoology translates, loosely, into the “study of hidden animals.” Bigfoot, the Loch Ness Monster, the Chupacabra — these are the big ones. But what about the minor cryptids? The ones that are the subject of obscure folklore? The Gnome of Gerona for example, or Ohio’s Grassman?

Iceland’s Lagarfljótsormurinn (better-known and easier pronounced as the “Lagarfljót Würm”), one of the lesser-known cryptids, gained a bit of fame Wednesday as video shot by a man named Hjörtur Kjerúlf went viral. The video appeared to capture a giant, slithering water snake swimming through a river in east Iceland.

Loren Coleman, director of the International Cryptozoology Museum in Portland, Maine, was quick to debunk the video as, “something that looks like a constructed snake-like object, with rigid sections, being propelled through the water.”

From the movement on the water’s surface, it would have to be something other than a mammal, like a giant worm, a reptile or a fish. The head appears to have been made to look like it belongs to a giant anaconda. The sections do not gracefully flow, but are sectionally moving from side-to-side. Mammals move up and down.

“The traditional sightings of this lake’s ‘monster’ (going back to 1345) are not ‘snake-like’ as the media is noting,” Coleman adds. “Instead, they describe Lagarfljótsormurinn as having a hump, a long neck, and whiskers, more like a long-necked Waterhorse than a giant snake.”

Coleman also pointed out that whoever tried to pull off the hoax started on the wrong foot entirely, believing the Worm Monster to be an actual worm, not translating it correctly. Instead, it should be translated as “wurm,” which would indicate something more like a dragon than a snake.

Still… it looks pretty cool. So watch below, and let your imagination run wild:

…and here’s a news report on whatever you think you see from WHAM in Rochester, N.Y.: