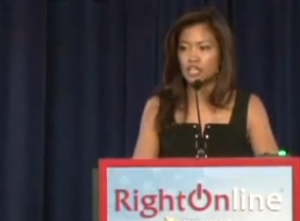 Michelle Malkin and Juan Williams recently got into quite a shouting match, complete with eye-rolling and Williams quipping that he’s a “real reporter,” not “a blogger out in the blogosphere somewhere.” Well, Malkin hasn’t forgotten about the incident and, at the “Right Online” convention this this weekend, she introduced herself as “just a blogger.”

Beginning her speech, she stated, “My name is Michelle Malkin and I am just a blogger.” She went on to add, “You’re blogging in your spare time when these ‘real reporters’ can‘t do their jobs when they’re on the clock! ‘Just a blogger.’ I want it on a T-shirt.”

Later in the speech, Malkin spoke about how she views journalism. And she had a message for the “condescending snotty Juan Williams elitists of the world”: “Journalism is not something you are, it’s something you do,” she said. Furthermore, she said she doesn’t like the terms “new media” and “old media.” The correct labels, she said, are “right media” and “wrong media.”

Elsewhere in the speech, she spoke about Soviet dissidents who risked their lives to voice opposition to tyranny. “I don’t think it is an exaggeration to make a parallel to today’s bloggers,” she said. By contrast, “real reporters,” she said, “won‘t even say the name ‘Brett Kimberlin’ out of fear.”

Malkin went on to thank those bloggers for what they’ve gone through:

The kind of harassment that I’ve gone through over the past twenty years pales in comparison to what these individuals bloggers [have gone through]…and we owe them so much for standing up, for telling the truth. Thank them, get their backs.