The Indianapolis Metropolitan Police Department got rather a lot of online pushback for a tweet using the hashtag #WeCanBreathe, which people took as a mockery of Eric Garner‘s last words.

Last night, Indianapolis protesters took to the streets to protest Garner’s case and police brutality. Two protesters were arrested for, as Lt. Christopher Bailey explained, traffic obstruction. A Twitter user identified as Joi Barnett got into a Twitter exchange with the IMPD about the arrests:

@IMPD_News soooo, why the arrests tonight of the PEACEFUL PROTESTORS?! #EricGarner #WeCantBreathe #indy

@ajoitobeme obstructing public right of ways is a public and personal saftey issue of which cannot be ignored for the welfare of all.

@IMPD_News they were corralling other protestors. That would have aides YOU ALL!! Communication and understanding is lacking. Unacceptable!

And then the IMPD tweeted this out: 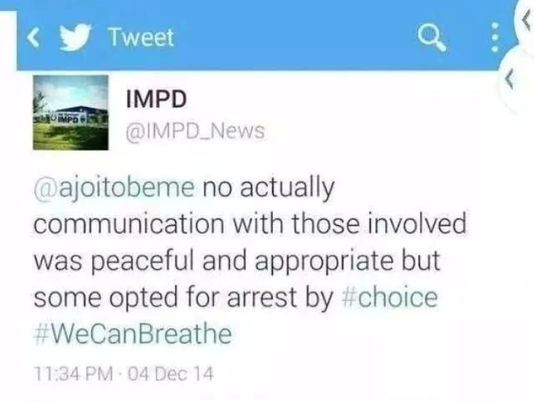 You can imagine how well that went over:

Totally disgusted at how @IMPD_News responded to @ajoitobeme with #WeCanBreathe. You don't mock a community for holding you accountable!

The @IMPD_News was seen laughing at the protesters last night. You need to be working WITH us not against us.

@IMPD_News that was Eric Garner last words! How dare you mock someone else death!

@IMPD_News your disgusting. Mocking the final words of a victim of police brutality #EricGarner #impd #shutitdown

After taking down the tweet, the IMPD posted this apologetic one saying they didn’t mean to mock anything or anyone:

We were attempted to localize the issue of peaceful protestors in #Indy and not mock national events.We have taken it down #LocalIssue