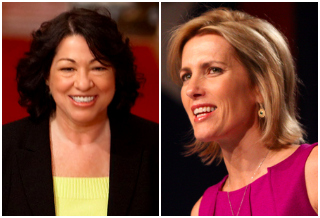 Conservative radio host Laura Ingraham lashed out at Supreme Court Justice Sonia Sotomayor Tuesday over comments she made in a speech Monday at Yale Law School on the topic of immigration. Sotomayor told the Yale audience why she finds the term “illegal immigrant” insulting, a remark that made Ingraham declare her “allegiance obviously goes to her immigrant family background and not to the U.S. Constitution.”

Sotomayor, who was the first Supreme Court justice to use the term “undocumented immigrant” as opposed to “illegal alien,” said Monday, “To call them illegal aliens seemed and does seem insulting to me.” Or as The Drudge Report put it, “SOTOMAYOR: Labeling Illegals as ‘Criminals’ is Insulting…”

“Her duty is to defend the Constitution and the laws of the United States of America, and that’s what she says?” Ingraham said on her radio show in response. “Why do we have a Supreme Court justice whose allegiance obviously goes to her immigrant family background and not to the U.S. Constitution? So we have no rule of law. We are going to pick and choose who has to follow the law in the United States.”

As Media Matters pointed out, Sotomayor is U.S. citizen, along with her parents, who, like all Puerto Rican Americans have had citizenship since 1917.