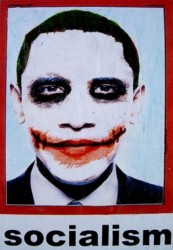 There’s a Barack Obama/Joker poster that’s spreading around the interweb like wildfire. It first surfaced back in April, but is catching on, now, in a big way.

The April Bedlam article noted a “Jim Crow quality” to the poster, and at least one writer has pegged it as being more than kinda racist:

The poster, which bears a very superficial resemblance to Shepard Fairey’s famous Obama Hope illustration, has been pasted on freeway supports and other public surfaces. It has a bit of everything to appeal to the drunk tank of California conservatism: Obama is in white face, his mouth (like Ledger’s Joker’s) has been grotesquely slit wide open and the word “Socialism” appears below his face. The only thing missing is a noose.

I think he’s overstating it just a little.

I don’t think the guy who made this intended to be racist, nor do I think the right wing is spanking themselves chafed over it because they’re racist (just behind-the-times dorks. Dark Knight came out, like, a geologic era ago). I give everyone 100% benefit of the doubt. When I was first writing this up, my 16 year-old son asked me what was so bad about blackface, and what the hell minstrelsy was. If you haven’t been the subject of it, you can be forgiven for not recognizing it.

Having said all of that, this poster is immediately and strongly evocative of blackface minstrel shows. Hey, it happens, like when some ad guy accidentally snaps a picture of something that looks like a phallus. But, there it is. Care, or care not, ’tis a fact.

Once this was pointed out, however hyperbolically, the right wing was reluctant to give up their new plaything. Both Hot Air and Matt Lewis, among others, immediately went to the “they-did-it-to-Bush-too” defense. While I understand being defensive when someone puts a noose in your hand, this is a really poor analogy. Obviously, Bush didn’t belong to a group of people that had been historically mocked and demeaned through the application of race-changing makeup.

Even conceding that the poster is racially insensitive, I don’t think it should be censored. Art is supposed to provoke, and the as-yet-unknown artist may have intended to tweak the minstrel angle to make a statement about politicians in general, or Obama specifically. Believe it or not, he’s not universally beloved in the black community.

On the other hand, if you wear this as a t-shirt, you might rightly offend some folks. That might be worth the conversation, but it’s silly to pretend that the concern isn’t valid.