Jake Tapper Fights Lone Survivor Backlash: ‘I Didn’t Say They Died for Nothing’ 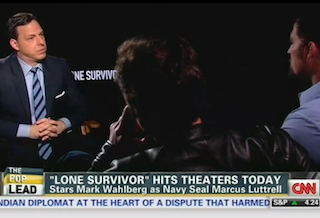 CNN’s Jake Tapper got into a tense back and forth with former U.S. Navy SEAL Marcus Luttrell, portrayed by Mark Wahlberg in the new film Lone Survivor, during The Lead Friday. Luttrell accused Tapper of suggesting his fellow SEALs “died for nothing” in Afghanistan, a charge the anchor was still contending with several hours later on Twitter.

Tapper took particular offense to a write-up by TheBlaze’s Oliver Darcy, who took the accusation out of Luttrell’s mouth and himself said Tapper “suggested in an interview that the ‘lone survivor’s’ fellow veterans died for nothing.”

It was after 1am ET, that Tapper started fighting back against the report on Twitter:

@oliverdarcy don't think 1st paragraph is accurate. No one said they died for nothing. Are you at all familiar w my reporting on the war?

When another Twitter user called Tapper a “grade A asshat” for a comment he did not actually make, he responded directly:

When another tea party Twitter user said Tapper doesn’t know about “heroes,” he responded with a link to his book, The Outpost: An Untold Story of American Valor

There was a lot more back and forth before Darcy’s boss Glenn Beck jumped in at close to 2am ET:

@glennbeck I didn't "take him on." I was talking about how I felt watching the movie. The deaths were horrific. Yet the afghans need help.

@glennbeck I aired the interview bc I thought that disconnect instructive. Civilian and soldier. Even if it can be misinterpreted.

As Tapper continued to defend himself against those who agree with Luttrell and think Tapper “suggested” the SEALs “died for nothing” Saturday morning, he started getting some unlikely support for conservatives like Erick Erickson, Hugh Hewitt and others.

Before you go off on @JakeTapper for a question to a soldier, you should read this: http://t.co/GPdfeT6lZR Get a grip people.

Folks who question @jaketapper support for troops should read #TheOutpost or this interview: http://t.co/ifLg0lUe81

As of Saturday morning, TheBlaze’s article on the interview is still featured front and center on the site’s homepage. It is unchanged, but this editor’s note appears at the top of the page: “Tapper said in several tweets early Saturday morning that he disagrees with TheBlaze’s characterization of his comments in the first paragraph of this story.”

Watch the full interview below, via CNN, and decide for yourself what, if anything, Tapper was “suggesting”: