James Franco’s Esquire Fiction: This Is Why Students Don’t Get Published

James Franco’s Esquire Fiction: This Is Why Students Don’t Get Published 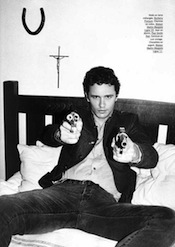 There’s a lot to be said about Hollywood nepotism in New York. Even though the East Coast hub has its share of celebrities, every time a star makes their home in the big apple, local media outlets treat it like the Greek gods themselves have deemed to rule us with their presence. Most of the time, these celebrities want to be left alone and work/go to school in peace. In the case of James Franco -whose alleged antics at Tisch and Columbia I’ve previously documented – being an A-lister in a sea of swarming fans means taking opportunities when you can get them. The most recent of which would be having his short fiction from his MFA get optioned by Scribner for an October release and having excerpts printed in this month’s Esquire. So how is the Pineapple Express‘ star’s writing? It’s exactly what you’d expect.

The story, “Just Before Black” has got all the aspirations of Denis Johnson and Charles Bukowski and a little bit Bret Easton Ellis, but not quite so talented. Descriptors like (in reference to a building’s wall color) “beige, but the shadows make it shadow-color” add to a melodramatic narrative about a young man named Michael who hates his fat Mexican best friend Joe, and imagines (and often acts out) various ways to kill both of them in his grandfather’s car. If this sounds interesting, it’s not, mainly because the prose works out like a high-schooler’s first attempts at dialogue:

In between there are some half-hearted attempts to get a feel for what might be going on in this character’s head, which also reads as completely ham-handed:

And I think about that missing tooth, and that gap, and how there was never a gap in that place before, and about three dimensions, and how the gap was on the inside of his mouth unless he opened his mouth and how things, shapes, folded in on themselves, and four dimensions, and if time is variable, then how do I vary it, and why do I want to? Because everything just focuses in on me and I hate it.

This isn’t to say that collegiate-level writing has no place in books or magazines: Ellis’ Less Than Zero was written for a college class, and much more accurately and horrifically portrays a young man’s apathy towards violence and sexuality. One hopes that Franco won’t coast on his Hollywood persona before