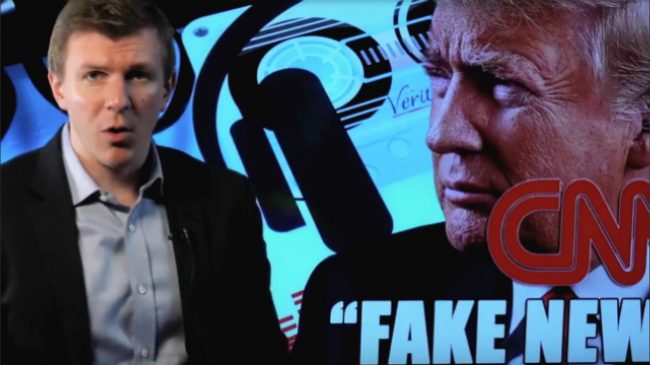 I haven’t checked yet myself, but I assume that CNN is now officially off the air after being shut-down in abject scandal, right? This must be the case because notorious conservative activist James O’Keefe teased yesterday that this morning he was releasing, just in time for CPAC, hundreds of hours a damning audio which was secretly recorded from their newsroom.

This was going to be big. Real big. So big that it had already had its own hashtag #CNNLeaks (you know, just like #WikiLeaks!). And since O’Keefe would never create a misimpression simply because it would get him more attention (and the monetary contributions which usually come with that), obviously this had to be the real deal.

Except it wasn’t. In fact, it wasn’t even close. In a rational world, it was a career-threatening embarrassment.

This morning, O’Keefe held a “press conference” (more like a small right-wing media circle jerk) in a CPAC hotel room where he released a prepackaged video about how awful the news media is. Within this short video there are a couple of minutes of rather innocuous audio clips from 2009 where the most damaging thing said is a from a mid-level CNN staffer being critical of their competitor Fox News. Some of the audio, if interpreted properly, actually shows CNN staff acting in a perfectly professional manner, totally consistent with basic journalistic ethics.

In short, O’Keefe’s big revelations came up smaller than Donald Trump’s pinky fingers. He would have been much better off if he had announced that he had discovered that Wolf Blitzer is actually a human being who has never even played football, and that Jake Tapper doesn’t even own proper dancing shoes.

It is exceedingly obvious that O’Keefe knows that his gun for this stunt is empty and that he prepared for the inevitable let down with a headline making distraction. He is offering $10,000 to anyone who can provide REAL evidence of news media malfeasance (hey James, Donald Trump is our president, where can I collect?). This seems to be an obvious stunt (one which seems to have its origins in something Andrew Breitbart borrowed from me) that in this situation inherently admits that he doesn’t yet have real evidence of any such nefariousness.

But you see, O’Keefe has an excuse. He just hasn’t had the time or the man power to go through all these very old CNN tapes, but he just knows that there are bombshells in there. As Trump might say, “Believe me!”

So, let me get this straight, he has hundreds of hours of tapes and creates a summary video for a CPAC-timed press conference which he decides to hype beforehand and he doesn’t even know what’s in the vast majority of the tapes?! How did he choose what to put in the video? Were those clips just the first thing which hit him from the portion of the batch to which he randomly listened?

If you know the modern media-attention game, it was clear yesterday that O’Keefe had nothing. You see, if you have something really great and have the ability to get it out there in a significant way (which O’Keefe, especially now in the era of Trump) there is no reason to pre-hype the material. You only do that if you know what you have is weak and won’t be able to stand on its own. Ironically, I learned this from O’Keefe’s one-time mentor Andrew Breitbart because I could always tell that whenever he “pre-hyped” something it was mostly bullcrap.

Making it even most obvious that this was a stunt was the fact that it was timed for the start of CPAC. O’Keefe is scheduled to speak there. If he really had a “bombshell” revelation about CNN, he would drop it then, live on stage, without needing to tease the public about it beforehand. But he couldn’t do this during his speech because the reaction would have mostly been: “Huh?!”

For the record, last night on Twitter I expressed this skepticism about what O’Keefe had planned for today:

Those breathlessly waiting for #CNNleaks …when you have ability to get a story big play, the only reason to prehype is it isn’t that great

The reality is that O’Keefe knows that the new King and his cult-like following hate CNN. He has some old tapes which could have revealed something interesting/important about them, but didn’t. So he, much like Trump himself has done in the past, manipulated the media by using the specter of past successes in taking down liberal organizations to pretend that he was on the verge of, as Matt Drudge likes to hype him, “striking again” (sure enough, the Drudge Report, as of this writing, has as its main headline, a face-saving story on O’Keefe’s meaningless “bounty” on the media).

All of this gave O’Keefe the currency of his business model, attention and credibility, all without a single relevant revelation which will have any impact on CNN at all (though I have no doubt that #CNNLeaks will be used as a hashtag by Trump cultists whenever CNN does a, probably true, story that they don’t like, as a way to lamely claim that the entire outlet has been “discredited” as “fake news”). The only one who should lose credibility here is O’Keefe, but that won’t happen because feeding a cult sweet little stunts is currently the most fire-proof business model in the modern media.

The irony here is that I like a lot of what O’Keefe does (while we are a lot alike and have communicated a few times, we have never worked together) and whole-heartedly agree with him about the basic nature of our incompetent and corrupt news media. My biggest problem with him has been that he tends to oversell what he found and pushes the envelope a little too far when it comes to his tactics. This episode particularly bothers me because he appears to be manipulating his naïve followers in a way which hurts the overall cause and benefits no one but himself (just like Trump does!).

Perhaps the next time O’Keefe cries wolf (blitzer), everyone should just wait until we actually see what he has before reporting on it. After all, isn’t O’Keefe asking for the news media to practice credible journalism?