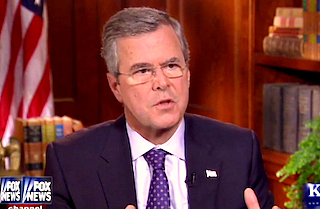 Washington Post’s Robert Costa and Ed O’Keefe have a good rundown of how presumptive GOP frontrunner Jeb Bush suddenly found himself atop a staggering campaign. Aside from organizational and message woes, they pinpoint Bush’s still inexplicable failure to answer Fox News host Megyn Kelly’s question about the Iraq War as the moment when Bush’s luck began to turn.

In particular, one source told the reporters that Bush’s inability to answer what should have been an expected question, which “crystallize[d] some of the key concerns about Bush,” spooked donors:

“We should have had that answer nailed down,” one donor said. “There were people who were really shaken by that.”

Bush fumbled his answer in his interview with Kelly, saying he would have authorized the invasion of Iraq as his brother had done. He later claimed to have misheard the prompt, a plausible explanation, then disdained all hypothetical questions, and finally walked his answer back. The flare-up even created problems for other GOP candidates, who had difficulty answering the question as well.

Spooked donors are not an academic problem: Bush faces reports that his Super PAC will likely fall short of its boastful $100 million goal. This comes in the midst of polls showing a five-way scrum for the lead in the GOP primary race, prompting Bush to shake up his campaign staff before he’s even officially announced.