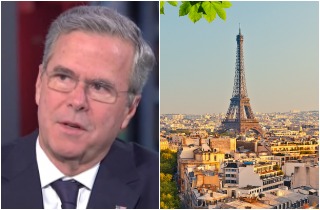 That comment did not go over too well with the French.

“You should be showing up to work,” Bush said at the debate hosted by CNBC. “I mean, literally, the Senate — what is it, like a French work week? You get, like, three days where you have to show up? You can campaign. Or just resign and let someone else take the job.”

Rubio has been under fire for missing Senate votes and intelligence briefings while he campaigns for the Oval Office, and Bush sought to capitalize on that. Using the “French work week” analogy, Bush insinuated that the French work fewer hours per week, on average, than Americans. Gérard Araud, the French ambassador to the U.S., fired back on Twitter.

“The French work an average of 39.6 hours a week compared to 39.2 for the Germans,” Araud wrote on Twitter. “In any country, electoral campaigns offer the opportunity for a lot of bombastic nonsense. Let’s be indulgent.”

In any country, electoral campaigns offer the opportuniity for a lot of bombastic nonsense. Let's be indulgent. https://t.co/fRyjoYYYjn

A French work week of 3 days? No but a pregnancy paid leave of 16 weeks yes! And proud of it.

Watch the original exchange below, via CNBC: