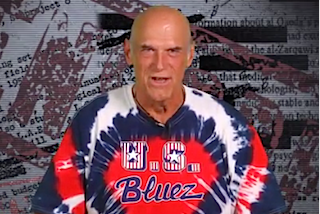 Reporting from his undisclosed location — and wearing a tie-dyed Grateful Dead “U.S. Bluez” t-shirt — former Minnesota Governor Jesse Ventura is here to share his thoughts about some of the “crazy things” Republicans running for president have said over the past weeks, months and years.

“These Republicans think they’re going to be president?” he asks in the new video. “Well not if they keep saying shit like this.”

Below are some highlights from his words of wisdom.

“As the carbon graph goes up, the heat graph goes up accordingly. It’s that simple. So the more carbon you’re putting into the atmosphere, the hotter it’s going to get. That is a scientific fact, Ted Cruz. It’s not debatable, it’s science.”

On Jeb Bush’s 1994 comments on women and welfare:

“I think the problem is slightly more than whether a woman should get her life together and find a man. Chances are she did find a man. That’s why she has kids and is on welfare, because he ran off.”

On Ben Carson’s arguments about prison and homosexuality:

“I would just ask him when he made the choice of whether to be gay or hetero… Unfortunately, it doesn’t work that way, you’re body tells you, you are born that way. But see, people like Ben Carson can’t get it through their thick heads that people are indeed born that way. They’re born gay like they’re born with black skin… Anybody who would make a statement like that should not be president of the United States by any stretch of the imagination.”

“Huckabee’s one of these religious fanatics who thinks you have sex just to procreate. Nobody’s told Mike Huckabee that sex is fun.”

“First of all, Donald, Mexico ain’t sending the people… They’re coming here to experience the American dream, but I guess because their skin is brown, we need to put a wall up. If their skin was white, we’d welcome them in, right Don?”

How is it possible that Jesse Ventura sounds more sane than every candidate running for the 2016 Republican nomination?