Jim Harbaugh Praises Kaepernick in Piece for Time 100, Applauds ‘Courage He Has Demonstrated’ 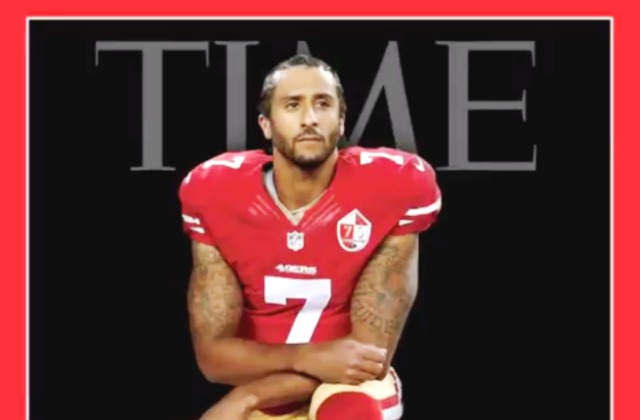 After being featured on the cover of Time last year for his National Anthem protest, former San Francisco 49ers quarterback Colin Kaepernick is back in the magazine’s pages this week. The free agent signal caller has been named to the Time 100, the venerable magazine’s annual list of the most influential people.

His former coach, Jim Harbaugh, wrote a few paragraphs of tribute to Kaepernick for the issue. And the current Michigan head man was very effusive in his praise:

Colin Kaepernick was alone in his early protests last year when he boldly and courageously confronted perceived inequalities in our social-justice system by refusing to stand for the national anthem. At times in our nation’s history, we have been all too quick to judge and oppose our fellow Americans for exercising their First Amendment right to address things they believe unjust…

I thank Colin for all he has contributed to the game of football as an outstanding player and trusted teammate. I also applaud Colin for the courage he has demonstrated in exercising his guaranteed right of free speech. His willingness to take a position at personal cost is now part of our American story.

Harbaugh coached Kaepernick for four seasons from 2011-2014. He tapped Kaepernick to replace Alex Smith as the 49ers starter in the middle of the 2012 season. And Kaepernick helped lead the team to an NFC championship, and very nearly a Super Bowl victory.

Harbaugh’s public backing of the quarterback comes several weeks after his brother voiced similar support. Baltimore Ravens head coach John Harbaugh recently said that he believes Kaepernick is “too good a player” to be an NFL free agent for long.

And yet, despite posting an impressive 16-4 touchdown to interception ratio in 11 starts in 2016, Kaepernick has not found a new team. Kaepernick went only 1-10 as the 49ers starter. However, in terms of his personal statistics, Kaepernick rates as a potential upgrade for a number of teams at the quarterback position.