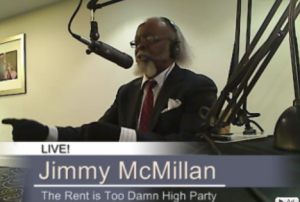 Despite losing his bid to become the Governor of New York, Jimmy McMillan—the most prominent member of the The Rent Is Too Damn High party—hasn’t lost an ounce of steam. The man roared his way through an interview on Revolution Radio yesterday, where he made a surprise announcement: He’s planning to run against President Obama in 2012. And he’s going to do it as a Republican. And it’s going to be awesome.

Or at least he makes it sound like it’ll be awesome, mainly because he plans to somehow incorporate martial arts into his campaign. When sizing up his opponent, he concedes that Obama is “a good-looking young guy, and I’m a handsome old dude. So there’s gonna be some competition there. He plays basketball, I teach karate.” Say no more!

Of course, he said much more:

“If you don’t do your job right, I am coming at you. I know Barack Obama is an Internet hog. I know he knows that I am out there. But what he hasn’t heard yet is that Jimmy McMillan is running for President of the United States of America. Well Barack Obama, you might as well turn your Internet up. Go to the website, President. I want you to look at all the hits Sarah Palin got. I ate her up. Look at all the hits John McCain got. I chewed him up. Look at all the hits Hillary Clinton had, I swallowed her, chewed her up and spit her out. Jimmy McMillan is well-known.”

He added that he’s already registered as a Republican so that he wouldn’t have to “bump heads” with Obama in a Democratic primary, a move that either highlights or undermines his gravitas—anyone’s guess, really. You can watch the outspoken McMillan announce his run in the video below.