Joe Biden: Bernie Sanders Is ‘Doing a Hell of a Job’
video

Joe Biden: Bernie Sanders Is ‘Doing a Hell of a Job’ 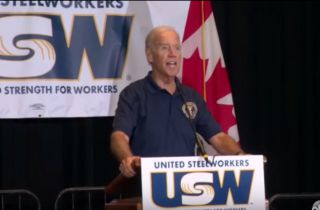 Amid mounting speculation that he will run for president, Vice President Joe Biden praised one of his most vocal potential rivals for the Democratic nomination on Monday at a Labor Day event.

“And by the way, by the way, this isn’t just Joe Biden — pro-labor, liberal Democrat…” the vice president said at a speech in front of the United Steelworkers labor union, attempting to dispel a potential narrative brought forth by the media that Biden is striking a “populist” tone to compete with Vermont Sen. Bernie Sanders, who is seen as the primary liberal challenger to Hillary Clinton.

“[The press will] probably say, ‘competing with Bernie Sanders’ — who’s doing a hell of a job, by the way,” Biden continued in the clip first flagged by America Rising, a Republican opposition research super PAC. Some members of the audience wildly cheered after Biden complimented Sanders, a democratic socialist who has attracted large, enthusiastic crowds this campaign season.

The vice president’s praise of Sanders came on the same day as a different speech he gave in Pittsburgh which observers noted sounded more like a campaign stump speech. Biden is said to be nearing a decision on whether to jump into the presidential race, as many Democrats continue to worry whether Clinton’s campaign can survive the controversy over the former secretary of state’s email practices that has engulfed her campaign in recent months.