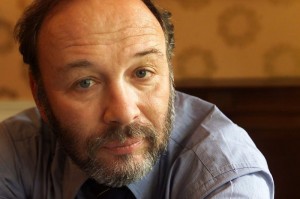 Let’s get this out of the way first: TIME‘s cover story “Can Service Save Us?” is an incredibly important piece on public service and veterans dealing with their post-traumatic stress. Joe Klein details the great work by groups like Team Rubicon, particularly in serious relief efforts like in Oklahoma after the devastating tornado that hit mere weeks ago. Which is why it’s just all the more insulting for Klein to take a random swipe at atheists for their supposed lack of volunteerism in contrast with religious groups.

What makes this particular bit of snark so striking is that religion and work by religious groups doesn’t really play that big a part in Klein’s piece to begin with. It’s was a throwaway fact in a throwaway line to give context to the picture Klein was painting of Oklahoma relief efforts.

Here’s what Klein had to say about the difference between believers and non-believers:

But there was an occupying army of relief workers, led by local first responders, exhausted but still humping it a week after the storm, church groups from all over the country — funny how you don’t see organized groups of secular humanists giving out hot meals — and there in the middle of it all, with a purposeful military swagger, were the volunteers from Team Rubicon.

Public service goes beyond whether you believe in God or not, it’s about serving your community. And the great thing is it doesn’t matter to people being helped whether or not the people helping them are believers. Kindness is not, nor has it ever been, synonymous with faith. Perhaps it’s just my own bias talking, considering I myself am an atheist, and I can’t help but get just a little annoyed anyone in the media says something disparaging or dismissive about atheists, but Klein is being unquestionably dickish here, and I’d like to know why TIME thought that phrase was acceptable to keep in their important cover story.

But aside from the whole obnoxiousness of it all, Klein happens to be factually wrong. Hemant Mehta, writing for Patheos’ excellent Friendly Atheist blog, thoroughly debunks Klein’s claim with these things called facts and statistics.

Now, in Klein’s fairness, maybe he just didn’t see any such groups when he was out in Oklahoma. But there’s nothing that can excuse how nasty he’s being by trying to belittle and dismiss the good works done by groups that publicly identify as non-religious.

But what really bugs me about Klein’s phrasing here is how he specifically refers to “organized groups of secular humanists.” There are secular and atheist groups that organize and lobby and protest and raise money just like all other groups do, but there are individual atheists and secular humanists and agnostics who do great public service and volunteer to help others displaced by tragedy. People don’t need to identify with a particular group, let alone a religiously affiliated one, to do public good. And if Klein is trying to frame this as some kind of competition that religious groups are winning, I can’t think of anything more antithetical to the spirit of togetherness he is trying to highlight.