John McCain Lashes Out at Reporters Over Gay Military Ban 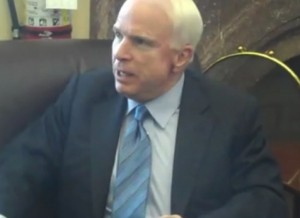 While his side may have won the day in preventing a vote on Don’t Ask, Don’t Tell, Sen. John McCain (R-Ariz.) appears to have lost the war with reporters after he loses his temper with two journalists from the gay press challenging him on the extent of investigations of gay servicemembers.

In a video, first posted by the National Review Online, McCain gets very defensive when pushed by Kerry Eleveld of The Advocate and Chris Geidner of Washington, D.C.’s Metro Weekly about the extent of investigations.

ELEVELD: But senator, that’s not…

MCCAIN: That is the fact! That is the fact. Now ma’am, I know the military very well, and I know what’s being done. And what is being done is that they are not seeking out people who are gay. And I don’t care what you say, I know it’s a fact.

ELEVELD: It’s not what I say.

ELEVELD: Senator, just to make sure…

MCCAIN: Just to make sure. We do not go out and seek out and find out….

ELEVELD: There are documented cases…

GEIDNER: It is the case of Mike Almy, Senators.

GEIDNER: But it is the case that it’s happening, Senator.

McCain is known for having a short fuse and his unwillingness to respond to the questions posed by Eleveld and Geidner demonstrate how uncomfortable the issue of DADT is for McCain. It’s also nice to see reporters from the LGBT press pushing Senators on Don’t Ask, Don’t Tell given the reluctance many reporters have in asking questions on the topic.

One of the nice things about covering Congress is that members can’t avoid talking to reporters after votes and they are forced to be accessible. The fact that NRO had this video suggests that even NRO was expecting a hearty defense of the law, not a nasty McCain firing back at journalists’ questions.