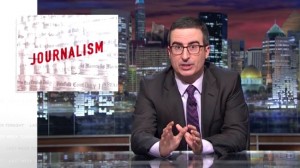 It takes a lot for me to really like something. Having an American win an Olympic gold medal is nice, but unless, like swimmer Lilly King did last night, you call out some cheating Russian woman and then kick her ass, I’m enough of a cynic to find some reason to not be terribly impressed. This is especially the case with regard to almost anything news related that I see on television.

So when I tell you that what John Oliver did this week on his HBO Last Week Tonight program is both the best and most important thing I have ever seen done on the subject of journalism, I hope that you will give that statement at least some credibility.

The primary reason that I still participate in our incredibly dysfunctional and, at times, utterly pointless public discourse is that I have concluded, through extraordinarily painful personal experiences, that journalism today is completely dead. I’m not talking about it being in trouble or that there are now large cracks through which the truth sometimes gets lost, allowing a lie to carry the day. What I have witnessed firsthand in my career is far worse than that and I feel a deep moral obligation to highlight this devastating reality however I can. This is the primary reason I recently started writing regularly for Mediaite.

When I began as a conservative radio talk show host about twenty years ago, I believed then that the news media’s biggest problem was the obvious liberal bias. Since then, that favoritism towards liberalism has only gotten worse, and yet I am firmly convinced that this is NOT even close to the most distressing issue currently facing the industry.

Instead, it has been my experience that a radically altered and now badly-busted business model of “journalism” has created a broken machine which can almost NEVER produce the truth and where lies now routinely rule (it’s therefore not a coincidence that we have now ended up with two extraordinary liars for our top presidential candidates). Just as bad, real news has been almost completely replaced with frivolous fluff. We are now continuously being fed almost nothing but the news equivalent of cotton candy.

In short, the Internet has created a situation where fewer, less skilled, people have far less time to devote to individual stories, an extraordinary pressure to be fast/first, and an overriding incentive to value the popularity of a story over its truth or importance. Modern journalism is much like if you took a winery and forced it to create product on a daily, rather than a yearly basis. Obviously you would never create any decent wine. Similarly, today’s news media almost never gets the story exactly right and often, far more than they even realize, they get it dead wrong.

On this week’s show Oliver nailed every aspect of this incredibly pressing problem and did so in hilarious fashion. After blistering the state of the industry in documentary style, he enlisted several name actors for a deadly spoof of the Academy Award-winning movie Spotlight, which was about the Boston Globe investigation into the Catholic Church. In it, no one supports the one lone reporter pursuing corruption at city hall because there is a hot cat/raccoon photo that is going viral. I urge you to watch all of it.

The fact that Oliver, a British comedian, has a greater understanding of, and obvious passion for, the crisis in American journalism than anyone else with a major platform is probably the greatest proof of just how incredibly dire the situation really is (it should be noted that Oliver singled-handedly did a FAR better job of vetting Donald Trump during the primaries than the entire “conservative” media). Ironically, of the many reasons that so few journalists have spoken out loudly about this horrific situation is that the collapse of the business model has eliminated any semblance of job security for them and thus greatly reduced their threshold for taking career risks.

This phenomenon is also at the very heart of why the “popularity over truth” issue is so damaging to journalism in the Internet era (I actually once had USA Today columnist Christine Brennan write to me that she believed her reporting on a story, on which I knew her to be very wrong, was good because it had been very popular!). Every time a reporter does a story which is important, but not “click bait,” they are taking a career risk, while a journalist going against a popular (i.e., usually false) narrative on which the rest of the media has jumped, is even less common than a pack animal leaving the safety of the herd.

Good gigs are now so scarce that no one will do anything to even theoretically risk losing them. Making matters even worse, those with the most powerful positions have the most to lose and are therefore even MORE risk adverse, thus making the journalism at the largest media outlets even more prone to inaccuracies born of dangerous group-think.

For journalism and truth to have any chance of thriving, reporters must be allowed to be rewarded, or at least not punished, for stories which are inherently unpopular (the truth is usually far less “commercial” than a nicely crafted lie) and for taking the risk of being contrarian. Sadly, in today’s world the opposite is so obviously true that even those still pretending to be “journalists” literally don’t even consider stepping out of line. It’s just not worth taking the chance of getting fired.

So kudos to John Oliver for at least articulating the problem in a way which might give it some much-needed attention. Unfortunately (and somewhat appropriately), it doesn’t appear that the subject is “sexy” enough for this episode to go as “viral” some of his other episodes.
—
John Ziegler is a nationally-syndicated radio talk show host and documentary filmmaker. You can follow him on Twitter at @ZigManFreud or email him at [email protected]