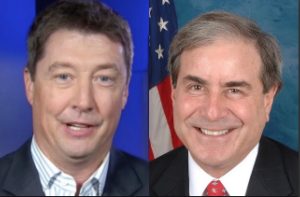 In this era where conservatives and liberals can never seem to agree on anything at all, I thought it would be interesting to share a conversation I had this week on my national radio show about the state of the news media in a “post-Trump” world, with liberal Democratic congressman John Yarmuth. Congressman Yarmuth is from Louisville, Kentucky where he and I once hosted a television show together and where he was once a newspaper owner and columnist.

What follows are the highlights of that interview. The entire conversation can be heard at this link. It begins with me making the argument that the news media was simply too broken to be able to properly deal with Donald Trump during the election.

Ziegler: The news media just isn’t built in a short attention span world in which we now live in where ratings are everything to handle a Donald Trump. You see what I’m saying there?

Yarmuth: Oh no, I think you’re totally right there that if you have somebody that according to the fact checkers lied 70 something percent of the time you can’t spend all your time taking him to task each and every one of those things. You’re absolutely right, and I think he clearly understood that you can create your own reality world and that in this day and age because mainstream media has been discredited over the last 30 years to the point at which competitive outlets, not that it, not nearly as, well I don’t want to use the word legitimate but that’s the only word that comes to mind, but they have equal credibility with many people and took advantage of that.

Ziegler: I want to make a comparison to the 2008 Democratic primary. See I think that, for all intents and purposes, Trump was the Obama character in that 2008 comparison, and Hillary basically had the same thing happen to her this year that she had happen in 2008 with this ratings superstar, this charismatic person who was telling people what they wanted to hear that we had never seen before and basically the same tidal wave just eight years apart….Trump’s basically the Obama for white guys, but more to the point with regard to the media. I think that what both Obama and Trump brought to the table media wise was ratings and a brand new exciting narrative and you know that that’s what the news media thirsts for more than anything is ratings and a juicy, easy narrative. Am I right that Hillary basically had the same thing happen to her first by Obama and then once by Trump?

Yarmuth: Yeah, I mean Hillary was never going to be the bright shiny object and Barack Obama was in 08 and even though Trump has been around a long time he was new to the political arena and he was guaranteed ratings, there’s no question about that. You can go back basically in my life time, you can go back to JFK, and he was the bright shiny object and Richard Nixon was the guy who’d been around, Vice President, clearly was not as exciting or charismatic and the media flocked to JFK. That’s part of our history but certainly with modern media and…

Ziegler: But John, it’s interesting you make the comparison to JFK because it’s become cliché that, you know, Nixon won the debate on radio and Kennedy won it on television, but you would acknowledge that the news media of today is far more ratings motivated than they were back in 1960. In 1960 you turned on your transmitter and you were a money making machine. It didn’t matter what the ratings were.

Yarmuth: Yeah, and back then there was a sense of civic responsibility in news organizations that were pretty much the standard from those networks. So yeah, your point is well taken. Things have changed dramatically since then.

Ziegler: That’s why I feel so passionately about this and why it has, to me, nothing to do with Democrat or Republican because I felt just as passionately about this in 2008 when I made a movie called Media Malpractice: How Obama Got Elected. I see Trump doing the exact same thing here where the news media, even though it’s perceived that they were hard on him… Do you not agree John that while the news media clearly in their hearts they didn’t want Trump to win, but in their wallets they’re thrilled he won. Aren’t they?

Yarmuth: Absolutely. I can go back to one day, way back, probably back in the summer where he called a press conference about something to do with the campaign and it was in his new hotel in Washington and the press all showed up and he did about a 20 minute promo for his hotel and never spoke about public business or politics or the election, whatever, and they covered him live for the entire 20 minutes of promoting his hotel. And after that I said oh my god, we have gone in very different territory now. The media totally sold out for ratings with this guy.

Ziegler: But what do we do about this? Because to me I think this genie is out of the bottle. I don’t see any way to put it back in a post-Trump world because think about what our presidential politics are going to be like in the future, especially in multicandidate races. It’s going to always be the shiny object as you refer to it, that’s going to get the coverage because we have, now that the media has set this precedent, how do you ever go back?

Yarmuth: It’s a really good question, and when you consider in the context of the social media and the way that, the very different ways that Americans get their information and the minimal role that actually television news now plays in the overall scheme of things, I’m not sure that there’s an easy way for legitimate, critical news media to reassert themselves. It’s, I think one of the great threats to democracy right now.

Ziegler: In the election John… if you had to pick one topic, one story, one element for instance of Trump’s background that shocked you the most that didn’t become a major part of the media narrative, what would it be?

Yarmuth: I still believe the video from 9/11 when he was on, I forget what national network, but I think it was CNBC, he’s on the network by phone, the building, the World Trade Center smoldering in the background and he’s talking about how his building at 40 Wall Street used to be the tallest building on Wall Street and then the World Trade Centers were built and then it was the second tallest and he said and now I guess it’s going to be the tallest again, and I don’t know how that could not disqualify him. I’m mystified still that the Clinton campaign didn’t do anything other than play that clip and say and you think he cares about you, I mean to me it capitalized everything about him. It’s all about him all the time and hearing one of the greatest national tragedies in our countries history he’s thinking, he’s even thinking about the fact that his building’s going to be taller now.

Ziegler: I think that’s definitely in the top five, but there’s so many it’s hard to choose. Now speaking of Hillary, recently she gave a speech in which she referenced this problem of fake news, which is now getting a lot of attention and understandably so because studies have shown in the last few weeks of the election more people got stories from fake news stories, some of them from teenagers in Macedonia, you can’t even make this up, than got it from the New York Times or some mainstream outlets and she suggested a legislative fix for this. Now you and I we differ politically a lot but we’re very similar when it comes to the media and free speech issues, this is to me, what makes this issue so difficult, is how in the world do you possibly create legislative fix for fake news that doesn’t obliterate the First Amendment?

Yarmuth: No, you can’t. You clearly can’t and I would love to hear her details, the legislation she is proposing. I can’t imagine as a member of congress either introducing anything like that or even voting for anything that tried to make that distinction. We have a competition of ideas and that’s actually what makes the country great is that we do have that competition of ideas and we have to battle it out, but there’s no way we can legislate that.

Ziegler: Well to me these are problems that are very frustrating because they’re so obvious, they’re so pervasive, they’re so destructive and yet there’s no answer. Right?

Yarmuth: There’s no answer. I mean there’s an email that’s been going around the world for many years now that talks about the fact that, alleges that you can be elected to congress for one time and get full salary and your retirement for life and that we don’t have to abide by the same laws that every other citizen does and we get our healthcare in different ways than the affordable care act. None of that is true and I’ve had to answer that for people probably about a 100 times, but that stuffs out there and we have to keep going after it. One of my biggest frustrations is that we as democrats, over the last five or six years have never, we just kind of said oh that’s not really having an effect, don’t worry about it, we don’t need to go in there…

We need to be out there, we need to be competing and saying no, not true. I mean, I remember one time I even posted that, this is in relation to the affordable care act that people say we don’t have to, that we get our healthcare a different way, when in fact the law says we have to buy our health insurance through the federal exchange that was set up under the affordable care act, and I actually, photo I took, I took a screen shot of the actual provision of the legislation and sent it back to people and they said that’s not right, that’s not true.

Ziegler: Wow that pretty much says it all right there. That’s the post-truth world we’re living in John.