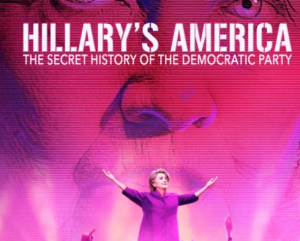 Conservative documentary filmmaker Dinesh D’Souza is out with a new movie in theaters this past weekend called, “Hillary’s America: The Secret History of the Democratic Party.” Overall, I thought the film was well-produced, though a bit conspiratorial for my tastes. I also kept thinking, “How exactly is Donald Trump any better, or different, from than this?”
I interviewed Dinesh over the phone about the film and here is an exact transcript of that conversation, with only light editing for space and continuity purposes:

Ziegler: Dinesh, the first question I have is: The vast majority of conservatives are already pretty much aware that Hillary Clinton is somebody who should never be president of the United States, is there anything in your movie that you think would persuade others that this is in fact the case?

D’Souza: Yes, I think so. I think that there are a good number of people who, while they may believe that Hillary herself might be a little shady, that she is the head of a party which has been doing good things for a lot of people. That the Democratic Party has a noble history of fighting for the underdog, the ordinary man, the little guy, immigrants, blacks and women. This is precisely the claim that my movie, and book of the same title, blows out of the water. This is a much more dangerous movie than my movie about Obama. That was a movie about the secret history of one man, this is a movie about the secret history of Hillary, and the progressive movement, and the Democratic Party.

Ziegler: I’m assuming that part of this purpose of this movie is not just to sell tickets, but you also want to try to influence the election. Is that is a fair assessment?

Ziegler: So are you not really hoping to influence the election?

D’Souza: I am hoping to shape how people think. But my job is not the same as the Trump campaign or the Republican National Committee. I’m not an extension of them and I have my own agreements and disagreements with them.

Ziegler: So let’s talk about the persuadable voter… what would you say is the one thing in “Hillary’s America” which would potentially persuade those who have not yet decided about this election?

D’Souza: I think that I am able to successfully show in this film that the Clintons are grifters and by grifters I mean scam artists. They are on the make and gangsterism is their defining characteristic…they put themselves first in whatever they do and they make sure they profit from whatever they do… Where my argument takes off is where we show that this isn’t a peculiar characteristic of the Clintons, but the Democrats as a party have been engaged in exploitation, subjugation, theft, and even murder over a long period of time. This is a strain within the Democratic Party which can be traced all the way back to its origins.

This is not just merely an election message, but this is a message which has been very effectively camouflaged by progressive historiography, so it’s important to me to bring it out. So I’m making a movie about an election yes, but it’s also a bigger story about American politics,

Ziegler: As a guy who has done a couple of rather large conservative documentary films myself, one of the things that frustrated me about the process tremendously is that, specifically when I made “Media Malpractice” about the 2008 election, because of the realities of modern-day politics, and partisans, you’re almost forced as a business model to basically preach to the choir and your movie is far more likely to be consumed by somebody who already agrees with you than it is by somebody who hasn’t yet made a decision about Hillary Clinton. Do you agree and is that frustrating for you as well?

D’Souza: I do agree with it, but it’s not a frustration… preaching to the choir is very important. That’s why preachers do it every Sunday. The choir needs to be informed, it needs to be educated, and it needs to be inspired. So that is a useful task. It is a particularly useful task this year because the Republicans are very divided… so our film can play a unifying role in the Republican Party which is very much needed.
If a sufficient number of people from your own team go see the movie and make it a sensation, then it will attract interest from the general public, in the same way that “Fahrenheit 9/11” did. I went to see that myself. I kind of knew that it would be an unbelievably stupid movie, which it was, but I was curious what all the hub-bub was about.

Ziegler: Obviously you believe from your movie and from your comments about it that anybody who would support Hillary Clinton is rather ignorant about who she is and/or has extremely poor judgment. At what point in her career do you think anyone who supported her would be deemed to have been lacking in good judgment?

D’Souza: I don’t know if I would agree with the premise of your question… but I do think that anybody who sees my movie and comes out saying that “I think Hillary Clinton is an upstanding citizen who deserves to be president,” does deserve to have their head examined.

Ziegler: The reason I asked you this is because you have been supportive of Donald Trump and Donald Trump is a guy who gave money to both Hillary Clinton and to the Clinton Foundation for many years, who praised her even after Benghazi, who invited her and her husband to his third wedding, so it would seem to me as if, based upon that premise, that the Donald Trump would be someone who would “need his head examined,” so why would you support such a person for president?

Ziegler: Now at the beginning of your movie is I believe a fictional depiction (actually a recreation) of you pleading guilty to campaign-finance violations. I’m in agreement that the penalties you received seemed a bit extreme for the crimes to which you pled guilty, but it seems clear you believe that you were targeted for prosecution by the Obama administration directly because you criticized Barack Obama in your 2012 movie about him. Do you have any real proof of that and if you really believe that, then why did you plead guilty?

D’Souza: My reason for believing that I was selectively targeted is that shortly after the movie 2016 came out, vituperative attacks on me and the movie began to appear on the website BarackObama.com. And while those attacks were unsigned, if you looked at the language and the tenor of the attacks, they have the sort of signature, if you will, of Obama. I am not saying he wrote them. I suspect he probably approved them. So I know that Obama was upset by the movie.
Shortly thereafter, the FBI came knocking on my door. The FBI said that my name came up in a routine review, but they were not able to name any other offender other than me who had been caught in that net. So this was a routine review which resulted in a single offender, me… No American has received the penalty I did for doing what I did… These are the reasons that I believe that I was selectively targeted.

Ziegler: Tell me this then. I’m open-minded, but I’m also a cynic. Why someone shouldn’t believe that you pled guilty because you made a political career calculation that being able to portray yourself as a martyr to the Obama Administration and even putting it in your next film would be more beneficial to you than the penalties you received by pleading guilty?

D’Souza: Yeah, this is the “Dinesh as Evil Genius” theory, which one day a week I must say does make me chuckle. But in reality, that is not the case. The reason I pleaded guilty is that the government used a very familiar strong arm tactic on me, which is often used to make innocent people plead guilty…

The government essentially came to me and said, “You want to risk being locked up for five years and be away from your family and ruin your life?” So that is part of the reason that I decided to take the plea. I did not want to risk putting it in the hands of a Clinton-appointee judge to decide if I should be put away for five years.

Ziegler: Fair enough. But do you agree that within your base of support being perceived as a political martyr of the Obamas administration has its benefits?

D’Souza: Yes, but I don’t agree that it makes rational sense to do something wrong to become a martyr. That seems to me a preposterous way to operate… Had the administration not been so heavy-handed, I would not be a martyr.

D’Souza: That’s a little hard to say. The movie just opened. The early indications are good. It’s a little difficult to make a movie about Hillary in comparison to Obama. Obama, not so much now, was a fascinating character because he came out of nowhere and people didn’t know much about him. He was an inherently interesting subject. Hillary is inherently uninteresting.

Part of it is that she has been around for so long that we all sort of have a picture of her. Most of the people who would be interested in my movie are sick of her, and if I put her face on the screen for ninety minutes they would want to blow their brains out. So the challenge as a filmmaker is, how to make a movie that is interesting about a woman who is not? I did that by telling the story of this Democratic “gang” or racket of which she is the leader.