Journalist Julia Ioffe, a contributing writer at Politico and columnist at Foreign Policy, received some criticism on Twitter today after tweeting a joke about President-elect Donald Trump and his daughter Ivanka.

There was news today that since Melania Trump will focus on raising her son Barron, Trump’s daughter will get an office in the space normally reserved for First Ladies. A Trump transition spokesperson has called this report “false.”

Ioffe responded with the following tweet (which has since been deleted): 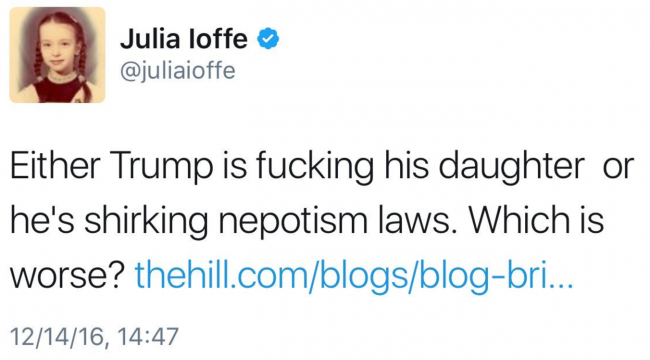 Ioffe followed up with a few tweets, ultimately taking down the above one and apologizing:

We have a president-elect who popularized "saying what everyone is thinking," but I guess my phrasing should've been more delicate.

In Russia, the Kremlin rarely has to make the call to media organizations. The media bosses anticipate and do the censoring themselves.

All that said, I do regret my phrasing and apologize for it. It was a crass joke that I genuinely regret.

It was a tasteless, offensive tweet that I regret and have deleted. I am truly and deeply sorry. It won't happen again.

Ioffe is moving from Politico to The Atlantic, and Politico sent out the following statement saying they’re accelerating the close of her contract:

The Atlantic sent out a statement as well: