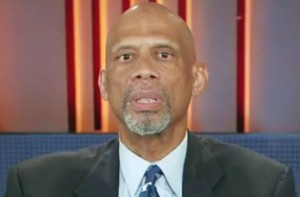 Kareem Abdul-Jabbar is standing up for Colin Kaepernick amid all the furor he’s gotten for his seated protest during the national anthem.

In a column for The Washington Post, Abdul-Jabbar writes says that even if some view what he did as “the entitled brattish behavior of a wealthy athlete ungrateful to a country that has given him so much,” what he actually did was behave “in a highly patriotic manner that should make all Americans proud.”

See, as he argues, patriotism is not just about the 4th of July and getting emotional when thinking about the sacrifices of brave Americans, it’s about taking a stand when “the government fails” in its obligations to take care of everyone:

And then Abdul-Jabbar wrote this:

One of the ironies of the way some people express their patriotism is to brag about our freedoms, especially freedom of speech, but then brand as unpatriotic those who exercise this freedom to express dissatisfaction with the government’s record in upholding the Constitution…

What makes an act truly patriotic and not just lip-service is when it involves personal risk or sacrifice.

He told CNN’s Jake Tapper this afternoon that free speech is about protecting the speech of people they don’t necessarily agree with:

He concluded in his column, “We still need to call attention to the same racial inequities. Failure to fix this problem is what’s really un-American here.”