Kasich Admits the Real Reason D.C. Is Not a State 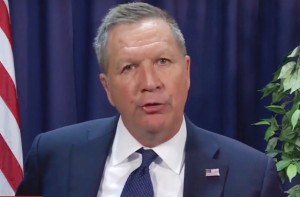 In an interview with the Washington Post editorial board, Ohio Gov. John Kasich was perfectly candid explaining the reason why the citizens of the District of Columbia do not have voting representation in Congress.

“You know what,” the Republican candidate said, “what it really gets down to if you want to be honest is because they know that’s just more votes in the Democratic Party.”

The nation’s capital, which has a population larger than that of either the state of Vermont or Wyoming, elects a single non-voting delegate to the House of Representatives. The district is, as Kasich notes, overwhelmingly Democratic. Its unofficial motto is “Taxation Without Representation.”

Here’s the complete transcript of the exchange in question between Kasich and the Post’s associate editorial page editor, Jo-Ann Armao.

ARMAO:  What about voting rights in Congress, voting representatives?

ARMAO:  But you realize though that people in D.C. pay taxes, go to war and they have no vote in Congress.

KASICH:  Well look, I am not — I don’t — I am not, because you know what, what it really gets down to if you want to be honest is because they know that’s just more votes in the Democratic Party.

Pressed on the fact that he did not have any constitutional basis for denying voting rights to D.C. residents who, Armao noted, “pay taxes, go to war and [yet] have no vote in Congress,” Kasich conceded that he might “flip-flop.”